‘We have to do right by them’ Rescue center misses fundraising during pandemic, but offers Primate Pal Program for those who want to help 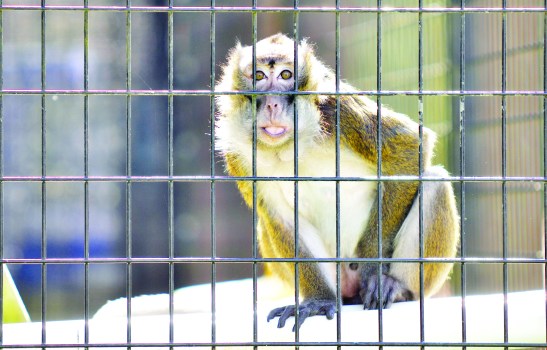 A monkey at the Primate Rescue Center checks out a visitor. - Photo by Jeff Moreland 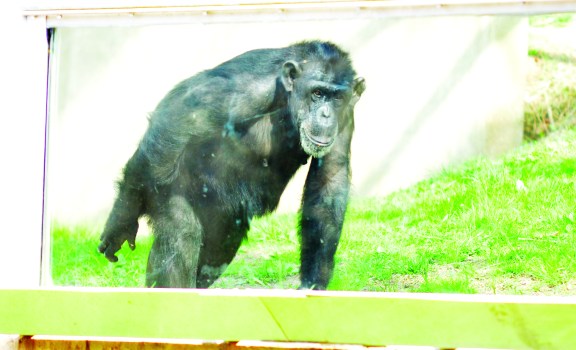 One of the eight chimpanzees at the Primate Rescue Center walks in the outdoor enclosure that houses chimps ranging in age from their mid 20s to their late 50s. - Photo by Jeff Moreland 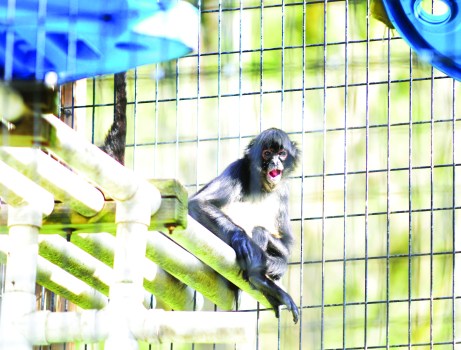 A monkey enjoys a sunny afternoon in its enclosure at the Primate Rescue Center in Jessamine County. - Photo by Jeff Moreland 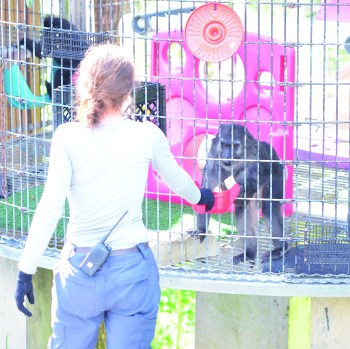 Madison McLean, a caregiver at the Primate Rescue Center, delivers food to a monkey. - Photo by Jeff Moreland 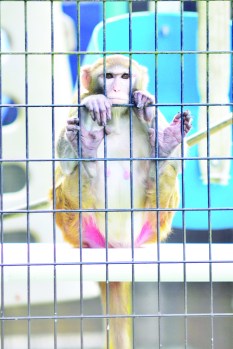 This little monkey hangs out in an enclosure at the Primate Rescue Center. - Photo by Jeff Moreland 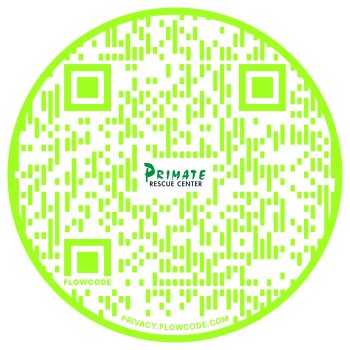 As most nonprofits will attest to, the Primate Rescue Center in Jessamine County has been hit hard by the global health pandemic. It wasn’t able to have fundraisers last year, nor offer any of its outreach programs to educate the public.

And as a nonprofit that offers sanctuary living for primates taken from often horrible testing and living conditions, beyond what most humans could even imagine, the center is aiming to make sure it can make ends meet and maintain the commitment it has for over three decades.

The Primate Rescue Center was born from the same actions it tries to educate people from doing — purchasing a baby monkey because “it’s cute.”

Eileen Dallaire, director of the nonprofit center, says founders Clay Miller and April Truitt found themselves with a baby monkey back in the ‘80s; Miller had gifted it to her as a surprise. “That was back before the internet was widely full of information about why that’s not a good idea,” Dallaire says.

She says Truitt knew they needed to return the monkey, “but in the dealer pet trade, that’s not an option.” Baby monkeys can sell for up to $5,000 each, so there’s a huge financial incentive, unfortunately, and not enough laws.

Miller and Truitt decided to “do right by the primate,” Dallaire says, and began researching about the care and companionship involved in raising one. This was back in the ‘80s, when there was only one primate sanctuary in all of North America, Dallaire says.

She says at the age of 2 or 3, monkeys can get aggressive or lonely, and difficult to care for.

“There were so many monkeys caught in the cycle, where people got into something and didn’t realize how extensive and robust of care is needed.” Dallaire says social media hasn’t helped either, with viral videos of “cute little baby monkeys, who wouldn’t want one? But when they grow up, you get more than you bargained for. The education just isn’t there.”

After they began constructing an area for monkeys to live in, which are safe enclosures with the room they need, they began hearing from other owners who couldn’t deal with their primates any longer.

So the Primate Rescue Center in Jessamine County was officially established in 1987. Then, in 1996, they received a call from a biomedical research lab out of New York that was closing down. Hundreds of chimps would be shipped off to a “horrible research lab in New Mexico,” Dallaire says, but a select few could be “snuck out and have a sanctuary life.”

But chimps are different from monkeys. Due to their massive strength and high intelligence — she says they know to only work on an escape route when humans aren’t looking — and their overall level of care required, they’re much higher maintenance than monkeys, so they built an area for chimps, too.

“They were able to take in those youngsters who would have otherwise gone on to have a lifetime of medical experiments done on them if they hadn’t been rescued.”

Every primate rescued and homed at the sanctuary has their own story, Dallaire says, which can be very disturbing. “But, they’re in a better place, now.”

Dallaire says they receive “help” calls from all over, like the report of a woman who had five chimps in a private home, living in a 10-by-10 concrete cell with no windows, or access to water or food. The woman hadn’t been able to clean the room for over 10 years, so they were living among waste mounds that were several feet high.

She says all but one made it, but they had to have lots of medical care.

“One of our greatest successes is after that, when we had two groups of chimps, youngsters and adults. We were able to introduce those two groups and unify them, and they’ve been a family ever since. They were able to form their own little family, despite all the ways humans tried to prevent that.”

Now, those “youngsters” are in their mid 20s, and the adults are in their 40s. “Zulu is in her late 50s now. It’s just a wonderful thing that they’ve been able to form a troupe together.”

Dallaire says it’s not a hard job to make primates happy, but it is hard work. “But it’s so rewarding knowing what their lives could’ve been … to be able to have the number of days in sanctuary start to outnumber the days they were not in good situations is just amazing. We hope that each day erases the memories of those past days.”

Dallaire says it’s troubling that there aren’t the best laws or regulations about owning exotic animals — several states are just now beginning to enact them. “What’s also so troubling is that it seems as we evaluate animals and their conditions, we can clearly identify when a dog or cat is being mistreated, or is not thriving.” But for some reason, she says we’re unable to do that with primates.

“We’re very clouded by the fact that we’re so similar to them, we think we’re an equal substitute for their families. We are not.”

Dallaire says many will still argue the point that they are providing a monkey or chimpanzee with “the best life they can.”

“But we don’t question the love and affection or the connection people can make with these amazing animals, but at the same time, they deserve so much more respect and dignity … Whether it’s having to wear a diaper all the time and have all their hair rub off, not having the appropriate diet, or not being able to climb. It’s just not fair.”

Dallaire says, simply put, the rescue center would not exist if monkeys made good pets. Most come to the center directly from owners, although they do get some from labs, those found roaming loose, or primates who have been taken from their owners.

They have their fingers crossed, she says, on making up the missed fundraising from last year. The center participates in Kentucky Gifts Day, through the Kentucky Nonprofit Network, which is coming up May 11. It has received some grants, but operates solely on donations.

They are at capacity now, and trying hard to maintain enough to be able to continue taking primates in. There are still many out there who need a home, Dallaire says, and they want to help all of them, “whether through us or through the network of reputable sanctuaries we work with.” So fundraising is of the utmost importance.

Those who donate, considered members, are invited out annually for an event where they can tour the center, which is not normally open to the public.

“We do also offer the Primate Pal Program, where individuals can pick one or more primates and help sponsor their care for the year,” a popular gift item for children and adults alike. When someone signs up for the program, which is $150 for the year or $12.50 a month, they get a package of info about the animal, along with updates and pictures throughout the year.

“We started it in 2013, and we have members who have renewed every year and they look forward to hearing about their pal, how they’ve made a difference,” she says. She finds it remarkable how people connect with primates.

But, she says, “they’re meant to live the life they deserve to live, not the box you want to put them in.”

To learn more about the Primate Rescue Center or how to donate, visit