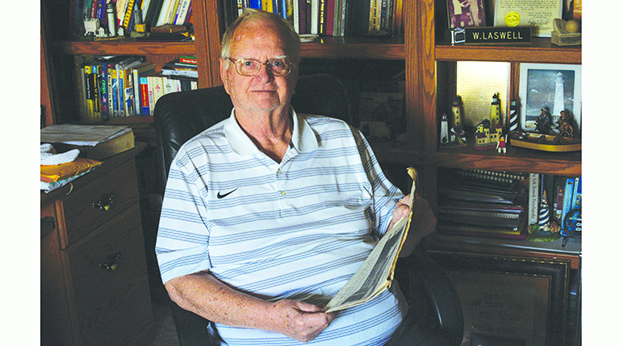 The Rev. Willie Laswell, founder and former pastor of Chapel Hill Baptist Church, and his wife, Lina Ann, contracted COVID-19 Oct. 30 and was not released from intensive care until Jan. 27. He still has health issues related to the disease. (Photo by Randy Patrick)

‘It’s in his plan’ : Pastor reflects on surviving COVID

The Rev. Willie Laswell could hardly catch his breath as he talked about his ordeal, and he had trouble remembering things.

As Kentucky marks the one-year anniversary of COVID-19 coming to the Bluegrass, the 82-year-old Nicholasville preacher was reflecting on his own experience of having the debilitating and often deadly respiratory disease.

“I had it real bad. They had me on a ventilator twice,” he said.

He survived, but nearly five months later, he still isn’t over it.

“I’m just making it through day by day,” he said.

Laswell is retired as pastor of Chapel Hill Baptist Church, which he started in 1971. But he also said twice that he retired from there in ’71. When asked for clarification, he said he retired in 2011. Or was it 2012?

“What’s wrong with me?” he wondered. “I’m sorry. I’m addle-brained this morning.”

Asked whether he suffered from “brain fog,” a condition many COVID survivors experience, he answered, “Yes, that’s what it is.”

When he started the church in 1971, Laswell said, he “knocked on every door in Nicholasville,” as an evangelist as well as a pastor. After 40 years, he got to the place where he couldn’t do that anymore because of his age and the community’s growth, so he not only retired, but started worshipping at Faith Baptist Church in Versailles because he “didn’t want to be in the way of the new pastor,” Bobby Lakes.

Laswell believes it was at Faith Baptist that both he and his wife, Lina Ann, contracted the coronavirus from a family that was sitting directly behind them.

He said the family’s son, a basketball player at a high school in Frankfort, had the virus but didn’t know it.

His wife didn’t get that sick. She had few symptoms. But “it about killed me twice,” he said.

Laswell said they didn’t wear their masks when they were sitting in the pews, only when they would get up to mingle or go in and out.

Infectious disease experts say COVID spreads easily in church settings because when people are singing, they forcefully expel their damp breath several feet, and it can contain infected water particles. People are most likely to be contagious when they first get the virus and don’t know they have it because they haven’t yet shown any symptoms.

For a short time during the pandemic, Kentucky’s governor closed churches, but a court struck down the order.

“I don’t remember hardly any of it,” Laswell said, describing his experience in intensive care.

“It was a blessing that I don’t remember it,” he added. “What I do remember, it was like sitting on a mountaintop in a forest in a clearing, and there were people all around me. I couldn’t get their attention, and I was just isolated.”

He said he was released from ICU on Jan. 27 and began to go to rehabilitation. He remembers “pretty well” everything that’s happened since then, he said.

Last Wednesday, Laswell seemed to be in good spirits. Just moments before meeting with a reporter from the Journal, he and his wife had gotten their COVID shots at home.

Lina Ann years ago suffered a major stroke years ago that left her paralyzed on one side. She is restricted in traveling and has to have someone with her at all times, so that has curtailed his activity, he said. But he still sometimes fills in for other preachers when they’re absent and teaches at Faith Baptist. He considers himself more of a teacher than a preacher.

“One of the traits of my ministry is that I can take all of the deep things of the Bible and make them simple where a child could understand them,” he said.

One of the things he teaches is what theologians call “determinism.” It is the belief that God determines every outcome. Or, as some describe it, that everything happens for a reason.

It is not a belief held by most Baptists, but it is by many.

“Either God is God of all, or he’s not God at all,” Laswell said. “The Bible says that no one can stay his hand. He does what he pleases in heaven and earth.”

“God knows what’s going on from the beginning to the end, and he’s in charge. If he’s not in charge, he’s not God,” he said.

Asked about how that belief relates to his own illness, Laswell was candid.

“It’s in his plan,” he said. “We learn through adversity. Right now, I’m learning to be humble and wait on the Lord.”

He said he is still waiting to discern God’s will in his life, but he believes that the Holy Spirit will give him the strength to do whatever God wants him to do.

What has happened to him, he said, could be for his “instruction, or for the instruction of someone else close to me who knows my situation. He uses situations to guide us where he wants us to go and to do what he wants us to do.”

And he always gets his way, he added.

The United States has been hit harder by the virus than most countries. Of the more than two and a half million deaths that have occurred in the world as a result of the coronavirus, more than half a million have been Americans.

“I think that America and Americans had gotten comfortable,” he explained.

They had ceased following God’s will, and their worship had “the form of religion, but not the power,” he said.

Laswell said this time is unlike the tragedy of Sept. 11, 2001, when Islamist terrorist attacks on the World Trade Center and the Pentagon that took the lives of 3,000 people resulted in millions of Americans turning to God, prayer, and churches for solace.

This time, people turned to politics instead, and the result has been rancor and bitterness.

“When the planes hit the towers, everybody came together as one. When COVID hit, everybody divided and argued and fussed and went their own way. This has not accomplished the purpose I think the Lord had in it, so I don’t think we’re done with it yet,” he said.

Vaccine expanded to anyone 50 and older

Gov. Andy Beshear on Thursday announced an expansion of who can receive the COVID-19 vaccine and is extending hours for... read more