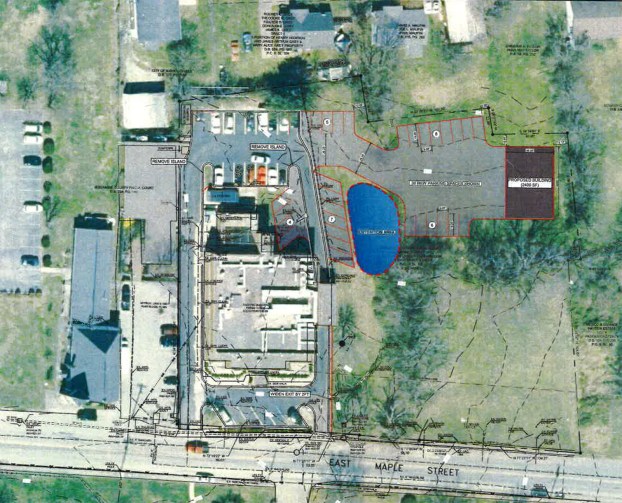 The area marked in red will be additional parking and a storage building at the Jessamine County Detention Center. (Photo submitted)

Magistrates unanimously approved spending about $140,000 toward the construction of a storage building outside the Jessamine County Detention Center.

Tuesday, the Jessamine County Fiscal Court approved the proposal from the jail to construct a 2,400 square-foot building and to expand the parking lot at the facility.

Jessamine County Judge-Executive David West said the building will be used to store equipment used by prisoner work crews. The crews perform a number of services around the county including mowing, road clean up and snow removal, he said.

The entire project was estimated at $340,000, West said, and the jail has $200,000 available for the project. The balance would come from the county, he said.

Jessamine County Jailer Jon Sallee said the building would simplify processing them in and out.

“This is a well-needed project,” Sallee said.

West said the parking and storage building would be added as a change order to ongoing renovations at the jail.

In June 2020, Sallee told the fiscal court the roof replacement was complete, and work was expected to begin to upgrade and repair most of the major systems at the jail. West said at the time the $1.3 million projet was the only major project in the county’s 2020-21 budget.

In other action Tuesday, the court:

• hired Sidney Hunt as an administrative and accounts payable clerk.

State to get a 29% boost in vaccine supply next week