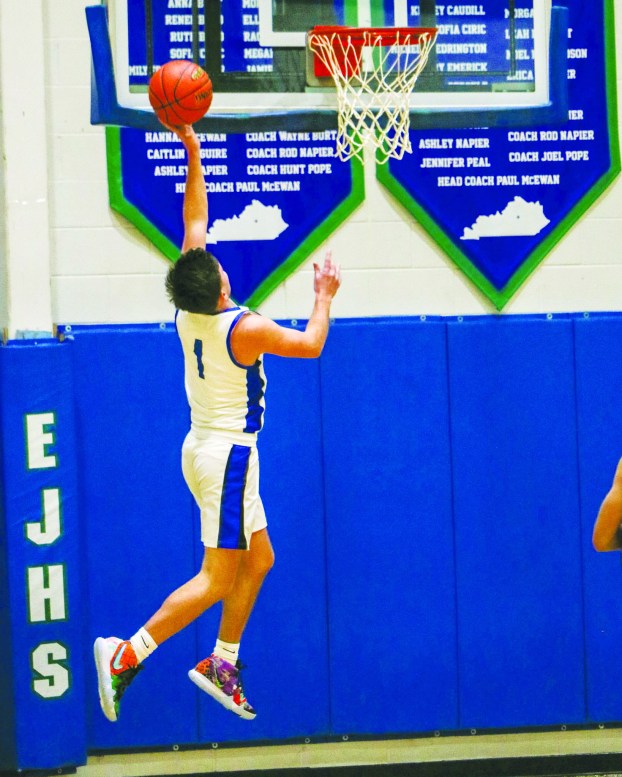 Ben McNew drives to the basket for an easy bucket. McNew recently passed the 1,000-point mark for his career, and moved onto the school’s top-10 career scoring list. - Photo by Clinton Riddle

East Jessamine senior Ben McNew passed the 1,000-point career mark on Feb. 8 when he scored 17 points against Rockcastle County in a 59-49 East Jessamine loss. He also moved into ninth place all-time by the end of the game, with 1,012 career points.

Still, McNew was even-keeled about the impressive feat, even if it was on his mind. But it took a little time before that happened.

“It was probably on my mind a little too much,” McNew admits. “But in the second quarter, I just started relaxing a little bit, just went out there and played my game.”

He also said that, despite the 1,000-point plateau being within reach, it didn’t change his approach to the game.

“I don’t think I changed my game, any. I went out there and played my usual game, but some of the shots I usually take, they just weren’t falling,” McNew added.

He also finished with seven rebounds in the game.

McNew started playing basketball in the Jessamine County Youth Basketball City League before joining the Bluegrass Stars in AAU play. He also played at the Kentucky Basketball Academy, and has been playing for East Jessamine since middle school. He garnered an offensive player of the year award as a freshman on the junior varsity team, as well as an academic all-state award that same year. As a sophomore, he set a single-season record for most three-pointers (72), and is currently third all-time at East from the three-point arc.

He also added that he’s never had a GPA below 3.6, an important factor going forward, as he plans to attend Asbury and major in exercise science.

His mother Melanie praised her son’s work ethic and focus.

“Ben has worked so hard all throughout high school, both academically and athletically,” she began, “and we’re just so proud of him. And to see him reach that milestone, it was pretty special.”

“After he reached (the 1,000-point mark), it was kind of a relief, really, just so he could focus on just playing and having fun,” she added.

His father, Chip, felt the pressure, as well.

“I think I was probably more nervous than Ben was, because after every game, I knew how many points he needed. And I was just really hoping that the team would stay healthy and stay safe, so all the games could keep going on. When his shots weren’t falling in the beginning, and he only needed five, I was really hoping he wouldn’t end the game with three or four,” Chip added, with a laugh.

“But I think he would have rather walked away from Rockcastle with a win.”

All in all, McNew has kept the accomplishment in proper perspective, and is looking to the future, instead.

“I’m planning to go to Asbury; I’ll be playing basketball there, too,” he said. “And I’ll be majoring in exercise science. So I’ve already got all that planned out.”

His ultimate goal? Head trainer for the Green Bay Packers.

“Either team trainer or team doctor,” he added. “I’m a big Packer fan.”

John Calipari could sense a turnaround on the horizon. Despite improvement behind the scenes during the past three weeks, the... read more