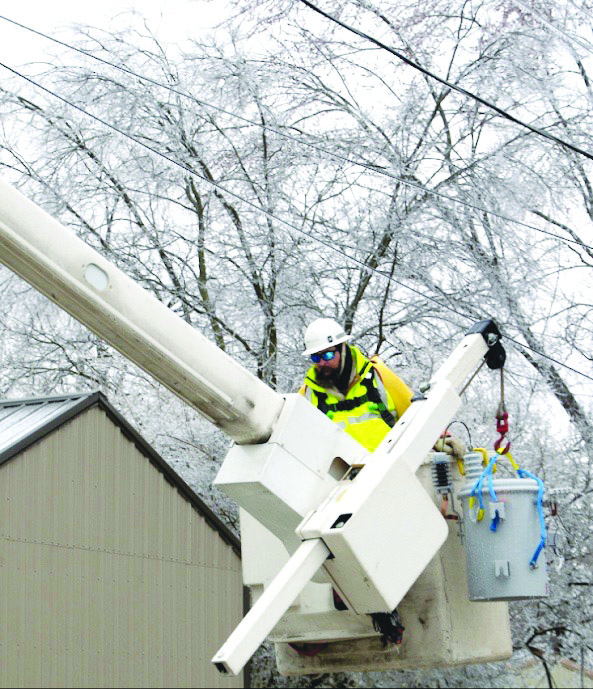 Last week, at the peak of the ice storm outages, 3,200 Blue Grass Energy customers were without power. By Monday afternoon, the cooperative’s outage map showed there were none.

In less than five days, electrical service had been restored throughout the co-op’s 23-county service area.

In Jessamine County, 1,424 had lost service.

That afternoon, though, Denise Myers, a spokesperson for the Nicholasville-based consumer-owned utility, warned that there could be more outages because of more winter storms expected this week.

Around 3 p.m., she said there was only a little sleet falling, but earlier in the day, the National Weather Service had issued another severe winter storm warning for Central Kentucky until Tuesday afternoon. Ice accumulations of up to half an inch were expected, along with snow and sleet accumulations of up to an inch. Tree damage and electric outages were likely.

“We still have some ice on the lines, and wind is never in our favor,” Myers said.

People need to be prepared for possible service interruptions, she said. They should make sure their cell phones are charged, that they have fresh batteries for their flashlights, and that if they’re on oxygen, they need to have a plan.

“We are as ready as we can be right now,” she said, but sometimes, “no matter how well we plan, Mother Nature wins.”

Myers said that last week when Jessamine and other counties in the co-op’s service area got hit hard, they had help from a co-op in Georgia that sent a team here.

She said the company is preparing for the next rounds by having its trucks serviced, its workers ready to go, and contractors ready to lend a hand.

Blue Grass Energy serves almost 13,000 households and businesses in Jessamine County and has customers in 22 other counties.