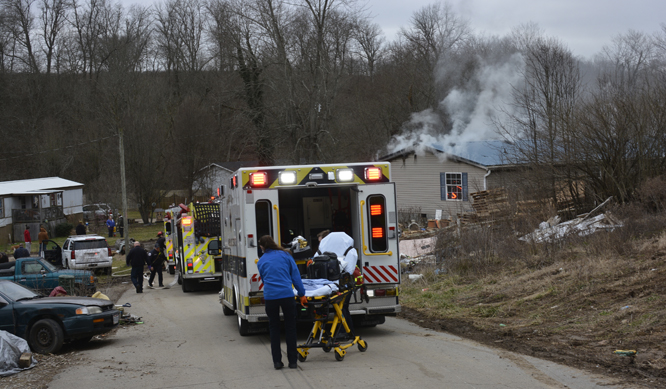 County and city firefighters, EMS and a sheriff's deputy responded to a house fire Wednesday morning on Ethel Drive.

A Nicholasville man suffered burns and smoke inhalation when the house he was living in caught fire Wednesday morning.

His son, Robert Watkins, said he and some other men who lived nearby got the injured man, his father, Paul Shaw, and another man, Pat Noel, out of the house.

“It was hard to breathe in there,” he said.

Two dogs were also rescued from the house at 365 Ethel Drive, in a mobile home park off Tates Creek Road near Brannon.

Firefighters were dispatched at 10:46 a.m., and Nicholasville Fire, which provided mutual aid to Jessamine County Fire, arrived on scene moments before the county firefighters from their nearby station in Brannon Crossing.

The Jessamine County Sheriff’s Office was also on hand, and Jessamine County EMS treated Shaw and transported him to the University of Kentucky Hospital. They were checking Noel for possible injuries around 11 a.m.

“His statement was that he woke up and the fire was around him. He was smoking a cigarette. He tried to put the fire out, and he burned his hands pretty bad. He has some deep third-degree burns on his hands and arms. Smoke inhalation.”

Rupard said the bed was burning, and it looks like that’s where the fire originated. A living room wall had also caught fire.

The chief said city firefighters got there at 10:52 and had “the fire knocked down before we got here, so we went in and backed them up.”

He said the fire appeared to be confined to two rooms with heavy damage in one of them. The rest of the house had smoke damage.

“Nobody got hurt other than the resident,” he said.

The two men and the dogs were the only ones there at the time, he said.