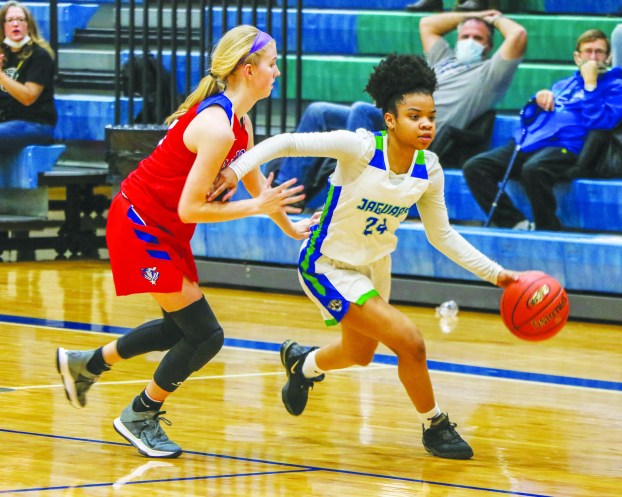 With local high-school sports emerging from a difficult and, at times, confusing 2020, East Jessamine’s girls basketball season got underway on Monday night with a 73-69 victory against visiting Lincoln County.

Led by a dominant performance from Iesha Dean, the Jaguars recovered from a chaotic first quarter and some early turnovers to open their season with a win.

Jaguars head coach Steve Bridenbaugh acknowledged the relative youth of East Jessamine’s current roster, while also mentioning their untapped potential. “I know we missed four layups in the first quarter,” began Head Coach Steve Bridenbaugh. “We didn’t get off to a good start. But we’ve got a good, young team, here.”

“And (the Patriots) are young kids, too. We started three sophomores, one senior and one junior. “But you know what? We’ll take the “W”. We’ve got a long way to go.”

While acknowledging the team’s fourteen turnovers going into the fourth quarter, Coach Bridenbaugh also noted that they had only four turnovers from that point forward.

He also noted the patience and commitment his team and, for that matter, the entire school has shown to making it possible for East to begin their season.

“You get ready to play, then you’re not playing, then you get ready to play again, and they say, ‘We’re gonna delay, a little bit.’ And, you know, they’re high-school kids, you know? They wanna play,” he continued on to say, noting how his players and staff have adapted to the new restrictions.

“And it’s a tough situation to be in, but hey, everybody’s in the same boat.”

Conversely, it was also noted that Wednesday’s game vs. Powell County had been canceled, due to current levels of COVID-19 infection in both Powell and Jessamine Counties putting them in the “red zone” as of January 4th, meaning that there are currently more than 25 cases of infection per 100,000 people, according to the Kentucky Public Health website.

“Coach (Ken) Jones has lost three games (off the schedule) this week, already,” said Coach Bridenbaugh, on the subject of how Kentucky high-school sports have been affected, and how schedules may remain fluid in the near future.

As it stands for the moment, nearly the entire Commonwealth is in the red zone. However, the Jaguars are still scheduled to play their next game this Saturday at 3:30pm against visiting Shelby County.

Calipari asks Fletcher to step away from team, evaluate future

John Calipari is used to players leaving his program. It’s happened more than once. One of his current players —... read more