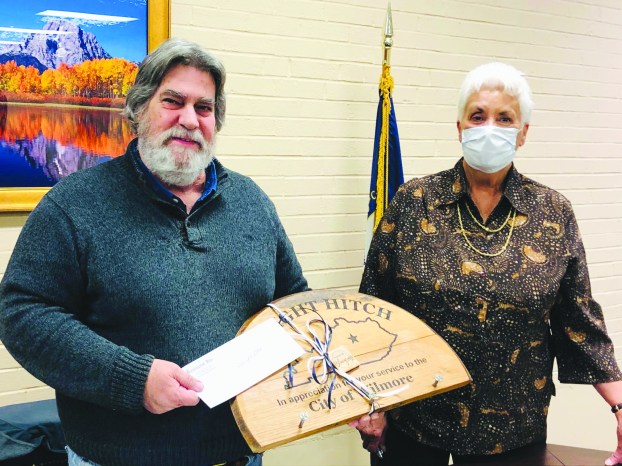 Attorney Dwight Hitch was presented a dining certificate and handcrafted wall plaque by Wilmore Community Development Board Executive Director Judy Woolums for his many years of service as a board member and chairman. (Photo submitted)

Dwight Hitch, a lawyer who has chaired the Wilmore Community Development Board for 16 years, has retired from that role and been honored by the town for his nearly two decades of service as a board member.

As of Monday, no one had replaced him as a board member or as chair.

“I just think it’s time for some fresh ideas,” Hitch said Tuesday. “I was glad to have been there and to have played a small part in the activities of the board. … I feel good about it.”

One of the best accomplishments during his time as chairman, he said, was the development of the Wilmore Green downtown, which has been used as a venue for concerts and other events. Last year, some landscaping was done on the green, including the planting of several varieties of trees.

In November, the board showed its appreciation for Hitch by giving him a handcrafted wall plaque and a dining certificate, according to Judy Woolums, the executive director of community development for the city.

Hitch called Woolums “the real heart and soul” of the volunteer program, which promotes community development, tourism and public events and reports to the mayor and council.

According to Woolums, Hitch has been involved with the program since at least 2002.