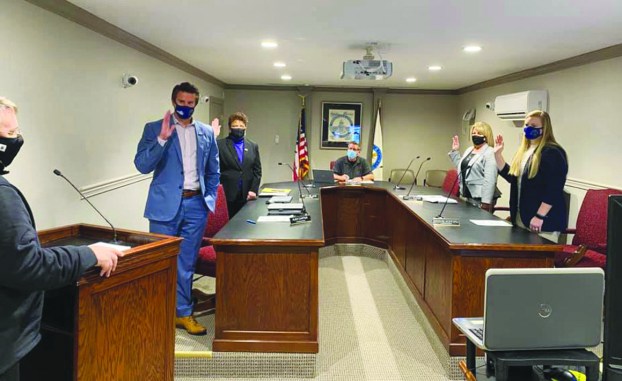 Nicholasville commissioners sworn in ahead of heated discussion

The incoming Nicholasville city commissioners took their oaths of office Monday night and had their first heated discussion about which departments they will oversee.

Monday’s meeting was also the final one for commissioner Doug Blackford, who chose not to run for re-election after serving for 12 years.

Each of the four commissioners is responsible for overseeing several departments within the city. Local tradition held that the commissioners choose based on the votes each received in the general election.

“I’ve got seniority over this table,” Black said. “I’ve had police and fire for eight years and I plan on keeping it. I’ve moved these guys forward.”

“I consider most of the street department my family,” Brown said. “I simply do not want to be their direct supervisor … in case there are conflicts. If there was (another) option for me, I would have taken it, but there was no other option.”

City Attorney Darren Sammons said city ordinance does not specify how the commissioners choose their departments, but that a city commissioner will be in charge of each department within the city.

Mayor Pete Sutherland offered a compromise by splitting the fire department and police department between Black and Brown, but there was no agreement.

“Bethany deserves to have her third choice,” Teater said. “If I was last, I would have taken what was left.”

“This is how it’s always been done,” Carter said. “There’s nothing in the ordinance. It’s never been an issue.”

No decision was made Monday. City Clerk Kathy Walker said the matter must be decided during the commission’s first meeting in January.

Earlier in the meeting, Sutherland and the commissioners honored Blackford for his 12 years of service to Nicholasville.

“Doug, I can’t tell you how much I appreciate you and what you’ve done for this city and the tireless effort you’ve put out,” Sutherland said. “You’ve served us well.”

Blackford said he learned quickly about the city’s employees.

“Betty and I started this journey together in 2008,” Blackford said. “Three weeks later, we get an ice storm. One thing was evident. Our city employees are top notch. What we were introduced to were employees going the extra mile. I got a sense of how important it was for our employees. I knew we would be OK.”

In other action Monday, the commissioners:

• approved the second reading of an ordinance to rezone 56.67 acres on Shelby Way from A-1 agricultural to R-1E single family residential district.

• reappointed Kim Flynn to the code enforcement board for a three year term.

• approved a later transfer for Zachary Travis to detective in the Nicholasville Police Department.

• met in closed session for 14 minutes to discussed proposed or pending litigation. No action was taken.

Thomson-Hood has no new COVID cases

After a deadly COVID outbreak at Thomson-Hood Veterans Center infected one in five of its residents, there have been no... read more