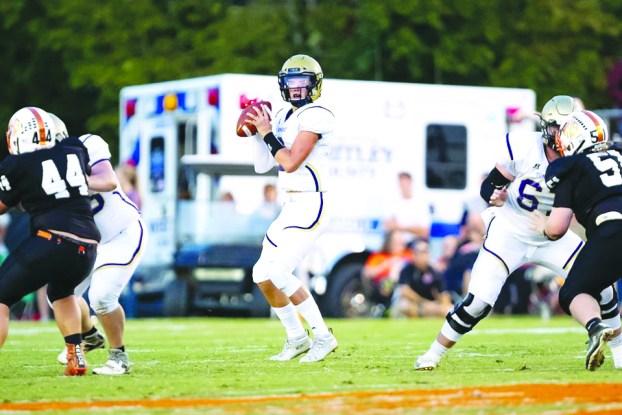 Somerset quarterback Kaiya Sheron didn’t let knee injuries early in his career stop him from winning a state title, amassing over 9,000 yards of total offense and getting the UK scholarship offer he wanted. He was recently named Class AA player of the year by the Kentucky Football Coaches Association.

Somerset coach Robbie Lucas felt that quarterback Kaiya Sheron had a better command of the offense this season than he did in 2019 when Somerset won the Class AA state championship.

“Obviously it was his team this year,” said Lucas. “He got better each year here and this year he improved a great deal. I have never coached a Mr. Football but he is a viable candidate for sure.

“He is that good. He had Power 5 offers and committed to Kentucky early or he would have had more offers. His future is extremely bright.”

Sheron planned to sign with Kentucky Wednesday even after the dismissal of offensive coordinator Eddie Gran and quarterbacks coach Darin Hinshaw.

“I trust coach (Mark) Stoops and he has done a good job at Kentucky. I trust who he will hire,” Sheron said.

Lucas said he never had a conversation with Sheron about UK’s offense this season.

“Kaiya will figure that out. A lot of times a team’s record is not indicative of what you are. During this COVID year to expect the Kentucky offense to bounce back and put up big yards this year was probably unrealistic,” Lucas said. “Kaiya gets all that.”

Lucas was most impressed by the way Sheron improved the way he read progressions this season.

“He just understood defenses and coverages better. He checked us in and out of a lot more plays this season,” Lucas said. “He lost some key receivers and linemen from last year. He had to adjust and let some other kids catch up with him. But we still scored a bunch of points thanks to him.”

Sheron missed part of his eighth-grade and freshmen seasons with knee injuries.

“I worried about his future. He never did. He just worked to get stronger,” Lucas said.

Sheron has what Lucas calls a “reserved personality” on and off the field.

“He never gets too high or low. I always thought he handled every pressure situation the same whether it was the last drive of the state championship game or our last game this year,” Lucas said. “He’s a very smart, heady kid. He’s a verbal leader but leads more by his actions. Kids look up to him and follow him because they see the work and effort he puts in. That’s why he improved so much.”

Somerset lost to Lexington Christian — a team it beat during the season — in the second round of the playoffs but Sheron was proud of the way his team handled this season.

“It was stressful, especially at the beginning,” he said. “We have a lot of seniors and bunch of guys close to me. If we had not able to play it was going to be really tough. Then when we did, we had a bunch of new kids that were not Somerset football ready for a while. We got better as a football team and I was just happy we got to play.”

Lucas said the COVID related stress took a toll on players and coaches.

“I felt like every morning we were in a shooting gallery. Was COVID going to take way the season or practice or games. It was like waiting for the bullet to get you. But we got to play nine games and had a very good team. Kiaya was our leader and handled being in that shooting gallery all year very well. He was very resilient.”

Sheron never had any second thoughts about finishing his high school academic work at Somerset this week and enrolling at UK in January to start his collegiate career even if it means giving up basketball where he averaged 9.0 points and a team-high 7.8 rebounds per game for his 26-6 team.

“No regrets (about missing basketball),” Sheron said. “Maybe later, but not now. I’m ready to report to UK and get started.”

Cats get off script, fall behind early as rally comes up short against Irish

Kentucky Today Kentucky tried to rally its way past Notre Dame but a second-half comeback fell short in a 64-63... read more