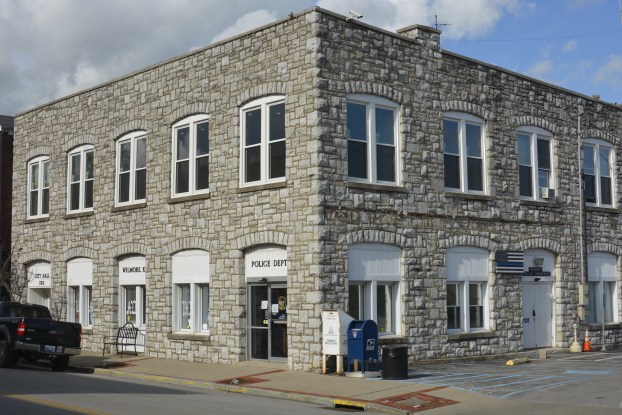 The old Wilmore City Hall on Main Street has been mentioned as a good location for a new restaurant. Advocates of legal alcohol in the town say that being allowed to sell wine, beer and liquor would make it more likely to attract a good restaurant. The city may soon be wet because the local option ballot question that passed Nov. 3 did not exempt it.

It wasn’t the intent, but when voters approved a ballot initiative last month to allow alcohol sales in Jessamine County, they made liquor legal in Wilmore.

That’s unless the City Council enacts an ordinance to prevent it, but there may not be anything the city can do.

“It is our understanding that the entire county will be wet,” Carpenter said.

The question on the ballot was: “Are you in favor of the sale of alcoholic beverages in Jessamine County?” And it was on every ballot, including those given to Wilmore residents.

County Judge-Executive David West said he doesn’t think it was those who circulated the petition to get the referendum on the Nov. 3 ballot intended for it to include Wilmore.

That was what the advertising said on the Make Jessamine County Wet 2020 website and Facebook page, and that’s how it was presented to the news media, including The Jessamine Journal, which reported it that way.

“We were all told that,” West said. “Everybody just assumed they had done their homework.”

Mollie Jameson, co-owner with her husband Tom Jameson of the Bellerive Plaza on Harrodsburg Road, was one of the main leaders of the campaign for the local option election petition.

She said she didn’t know until Monday, when The Journal called her about it, that it was the opinion of some lawyers that the referendum included Wilmore.

Jameson said she hired an attorney from Bowling Green, Brett Reynolds, to write the ballot question.

“I didn’t want that to happen,” she said.

Reynolds said Tuesday he did some “preliminary work,” but he hadn’t been involved with it since April.

“I never knew that there were supposed to be any municipalities exempted,” he said.

He also didn’t know the ballot initiative had passed.

Jameson said the group also hired a Nicholasville lawyer, Bruce Smith, to work on the initiative but he wasn’t involved in drafting the wording.

“The petition had already been circulating by the time I was engaged,” Smith said. “I wasn’t tasked with researching that aspect.”

Still, Smith said, he thought the wording matched “what the state law says it has to be.”

“It wasn’t the intent to include Wilmore,” he said. And he isn’t convinced that it does.

The Kentucky statute for a petition for a local option election for the sale of alcoholic beverages is KRS 242.020. It states that to get the question on the ballot, proponents must have the signatures equal to 25 percent of the number of voters who cast ballots in the last general election. After that, the county judge-executive must order that there be an election held “in that territory.”

“Substantial compliance with the wording designated under this chapter for a particular type of petition is sufficient to validate the actual wording of the petition,” the statute says.

“The fact of the matter is that Jessamine County voted to go wet,” and Wilmore is part of Jessamine, Chris Johnson, an attorney for the Kentucky League of Cities, said.

Johnson said there was a Zoom meeting after the Nov. 3 election involving attorneys with the Department of Alcoholic Beverage Control and officials of several counties that had wet/dry elections, including Jessamine County, and the ABC lawyers’ interpretation was how the lawyers interpreted it.

“It’s a little confusing, so we’re going to have to get clarification” from the state ABC, said Carpenter, who began her law enforcement career as a state investigator for state alcoholic beverage control.

Carpenter said there can’t be any liquor licenses issued until at least 90 days after the election, when the new law goes into effect.

Currently, alcohol sales in Jessamine County are only allowed in Nicholasville and places outside the city limits where there are special exceptions under state law, such as wineries and golf courses.

“I believe Wilmore may have to have a special election if they want it dry,” Carpenter said.

2021 is the one year in a four-year cycle when there isn’t a regular election in Kentucky, so if there is a special election, someone would have to pay for it.

Anna Joy Bryson of Nicholasville, who helped campaign for the ballot initiative in Wilmore, doubts that its residents would vote to go dry after alcohol sales become legal in the city.

“A lot of signatures we got were Wilmore signatures,” she said.

Mollie Jameson said she doesn’t know the exact number, but she thinks a majority of Wilmore’s registered voters signed the petition.

As for how they actually voted, there is no way of knowing because this year, because of the coronavirus pandemic, people didn’t vote in their regular precincts. There were only six polling places, and anyone could vote at any one of them.

“I think it’s interesting how it came about because it was not our intention” for the alcohol sales to be allowed in Wilmore, Bryson said.

“I do think it will be a good thing for Wilmore in the long run,” she said, because it will make the town more attractive for restaurants to locate there.

Wilmore is a conservative town of about 7,000 that is home to Asbury University and Asbury Theological Seminary. Both institutions have historically advocated abstinence from alcohol and have had significant influence over the city’s government. The Christian college forbids recreational consumption of alcohol. The Wesleyan seminary several years ago changed its policy to allow faculty, staff and students to make their own decisions about alcohol use, but maintains an alcohol-free environment with respect to seminary “facilities, events and activities.”

Joshua Lourie, an Asbury University alumnus who is the facilities and engineering manager for Alltech’s Lexington Brewing & Distilling Co., lives on Main Street in Wilmore and is able to see the issue from both sides.

“I understand (that) part of the culture of Wilmore,” he said, referencing the town’s conservative evangelical culture. But many of his friends are seminary students who drink and would like to see nice restaurants in Wilmore. So many small towns, including Midway and Versailles, have shown that they can be destinations if they have good restaurants that serve wine, beer or bourbon, he said. And the city council and planning board can use licensing and zoning regulations to keep out what they don’t want, such as “dive bars” that don’t get most of their income from food.

City Councilman Leonard Fitch, owner of Fitch’s IGA, however, doesn’t like the idea of Wilmore being wet, and said he won’t be applying for a license to sell beer at his store.

“I think Wilmore would be better off without alcohol,” he said, mentioning that he has had family members who have had problems with drinking. “I know some of my friends think I’m foolish, but that’s how I feel.”

Mayor Harold Rainwater said he had talked with a lawyer and county officials about “why this was put on the ballot incorrectly.”

“We are of the opinion that Wilmore should have its own say on this,” he said.

‘Living with less so that others might have more’ On a cold, bright Wednesday, Andy Bathje sits on the porch... read more