Holiday looked different this year for some families 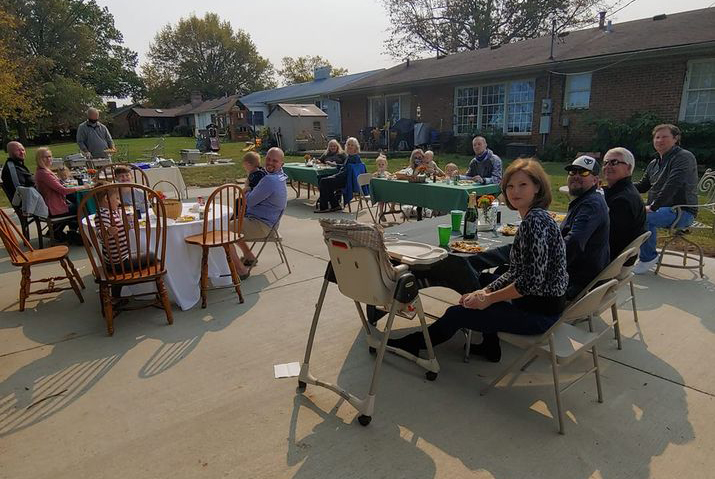 The Pohl family of Wimore had their Thanksgiving dinner more than a month early to take advantage of the warm weather and be outdoors. (Photo submitted)

Thanksgiving came early this year for the Pohl family of Wilmore.

The big family, originally from New York, wanted to gather and give thanks, but do so in a way that reduced the risk of anyone getting the coronavirus. So instead of having Thanksgiving on Nov. 26, they had it outdoors in mid-October.

“Today, my whole family had an early Thanksgiving outside while it was still warm enough to do it,” Chelsea Pohl Noble said in a Facebook post on Oct. 17. “Each little family had their own table on our basketball court and ate together.”

“Avett and Josiah memorized some Scripture and shared it,” she said, referring to two of her children. “It was so special.”

Noble’s mom, Dottie Lewis Pohl, mentioned that her husband, Ron Pohl, was the only one serving the food, and he wore gloves to reduce the chances of spreading the virus.

“It went very well,” she said. “Anyone who got up from their table wore their masks, and we were able to talk to and see each other and all the children,” the grandmother said.

Pohl said it isn’t necessary to celebrate on “the actual Thanksgiving Day.” Any day can be a day of gratitude.

Because of the recent surge in coronavirus cases nationally and in Kentucky, many families were rethinking the way they might do Thanksgiving this year. Some decided to limit it to just their immediate households. Others opted for virtual get-togethers using applications like Zoom or Google Meet. Still others, like the Pohls, planned an open-air gathering.

Shawn Claggett, a Nicholasville businessman, said he was thinking about having a gathering on a houseboat on Lake Cumberland “if the weather looks good.”

“Normally, we have almost 30 people,” he said, but this year “there will definitely be a lot less” if they have it outside on the houseboat and even fewer if they have it at home.

The lake is “a nice environment,” and having a gathering of family and friends on the water would “not be unique” for his family, he said.

Wilmore Mayor Harold Rainwater said he would be having dinner with his son’s family, and it would be only two households with six people.

He said it would be the “smallest gathering ever for our large Rainwater family.”

Rainwater added that they haven’t had a gathering of the entire family since last Christmas.

Nan Riekert, who lives on a Jessamine County farm near the Kentucky River, said she will be seating only seven adults at her family gathering this Thanksgiving, and they will be wearing masks when not eating and keeping a safe distance. They also plan to all be tested for COVID-19 as close as possible to the holiday.

Last year, Riekert combined her family with her son’s family, so it was a good-sized group, but “this year we have a six-week-old baby to protect,” she mentioned.

Johnny Templin, executive director of the Jessamine County Homeless Coalition, was going to have a dinner Thursday night for anyone in need at the shelter on East Maple Street with tables spread several feet apart under open tents.

Gov. Andy Beshear asked Kentuckians last Sunday to limit family gatherings this Thanksgiving because of the “exponential” growth in the spread of the debilitating and often deadly respiratory illness. Last week’s record number of coronavirus cases in the state exceeded the previous week’s record by more than 3,700.

Nationwide, there were more than a million new cases in the last week.

The Centers for Disease Control and Prevention suggested alternative ways of doing Thanksgiving, including virtual meetings or gathering only with those of one’s own household.