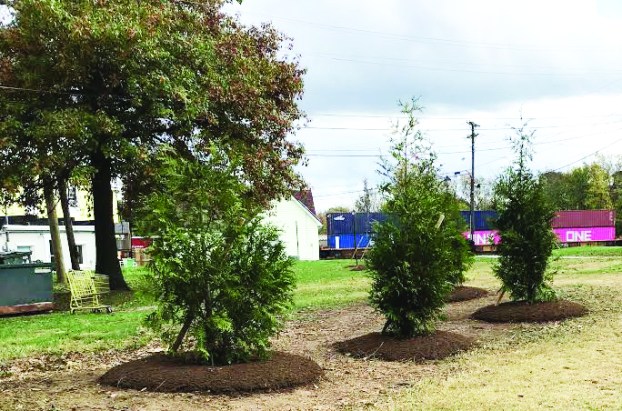 Wimore’s downtown green just got greener with the planting of 10 trees this autumn. (Photo submitted)

Wimore’s downtown green just got greener with the planting of 10 trees this autumn.

The city got a grant from Louisville Gas and Electric and Kentucky Utilities to pay for the trees, which include a variety of evergreen and deciduous species, including hop-hornbeam, yellowwood, flowering crabapple, arborvitae and serviceberry.

Judy Woolums, the city’s community development director, said the trees were planted about four weeks ago.

The downtown green is a community gathering place on the south, back side of East Main Street for concerts, festivals and events and private rentals. Its Victorian-styled pavilion has a stage for performances, park benches, tables, walking paths and flower pots.

Woolums said that prior to the planting of the trees, it had not been finished the way city leaders wanted because of lack of funding. But that changed in March when LG&E/KU awarded the city a $2,000 matching grant, with the city to contribute an equivalent amount in in-kind services and purchases of materials.

“I’m so happy we got it, because money’s been kind of tight this year,” she said. “It’s going to enhance the view from the green and also from the buildings.”

The Plant for the Planet matching grant from the utility companies was part of their Right Tree, Right Place place program that encourages the planting of trees that will not interfere with utility lines. This is the second time Wilmore has gotten one.

The city’s in-kind contribution included using city labor and equipment to remove several dead or dying trees and clear away invasive growth. The city is also providing “gator bags” for each tree to provide continuous moisture for the plants.

The trees were recommended by LG&E and KU Energy, and Glynn Young’s Landscaping of Nicholasville helped with the selection and planting.

Woolums said in a press release that a curved planting line was used to allow for a more natural look and a mixture of species was chosen to allow replacements as needed and avoid a too formal appearance.

Woolums said business owners adjacent to the green have been cooperative in maintaining the backs of their buildings and parking lots and have expressed appreciation for the improvement, which is mutually beneficial to them and the city. The business owners and city representatives of the city are discussing other improvements as well.

Although the coronavirus pandemic suspended all public events on the downtown green, the city is making plans to resume activities in 2021.

After its second-highest single week of COVID cases, and already two dozen new cases this week, Jessamine has surpassed the... read more