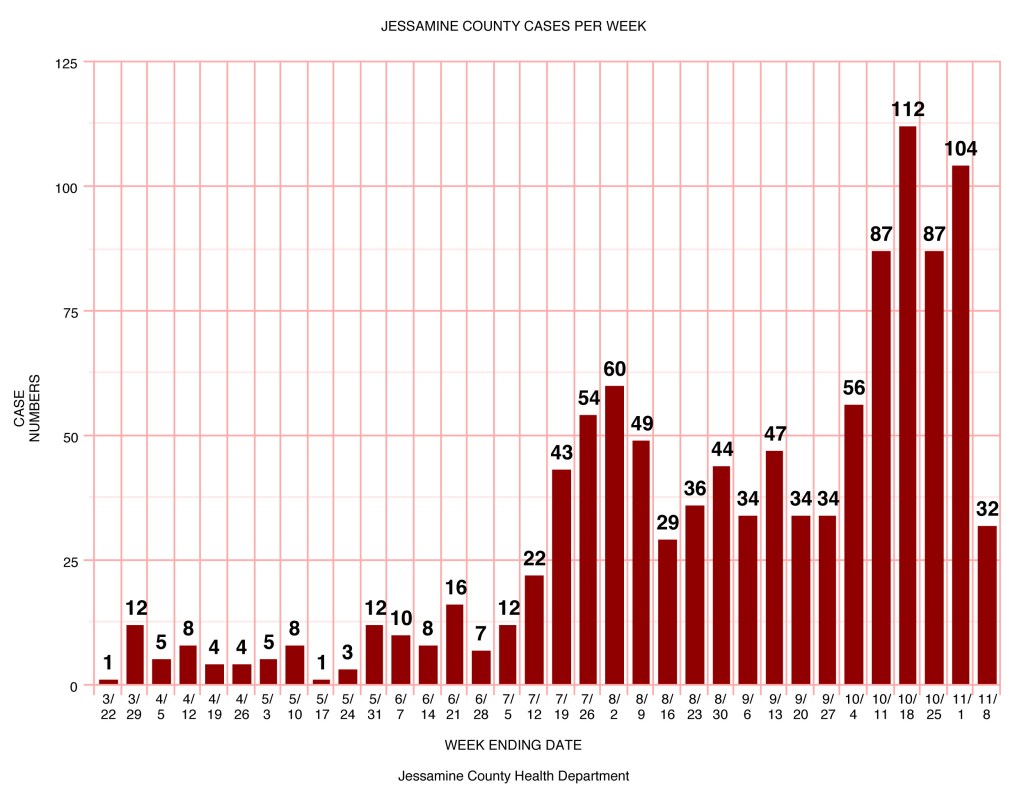 After its second-highest single week of COVID cases, and already two dozen new cases this week, Jessamine has surpassed the 1,000 COVID-case mark.

As of Tuesday’s daily COVID-19 summary from the Jessamine County Health Department, there had been 1,080 positive cases identified in the county.

Of those, 24 were newly reported on Monday and eight were reported Tuesday. Additionally, 182 were considered active Monday, and 13 people were hospitalized.

There have been 15 deaths attributed to the virus in the county, including 13 deaths of veterans who were residents at Thomson-Hood Veterans Center in Wilmore, where there is an outbreak of the virus.

The large majority of local cases remains among the 18 to 30 age range, with more than 250 cases in that age range.

At least 883 Jessamine Countians have recovered from the virus since March.

More than 5,600 people have been tested at the Jessamine County Health Department, which offers drive through testing by appointment only.

Of those testing positive, 62 percent have been asymptomatic.

Right now, the community has a 3.1 percent positivity rate overall.

During the week ending Nov. 1, though, the positivity rate was 10.19 percent, and the week prior the rate was 16 percent.

With the rise in local cases, the county remains in the Department of Public Health’s red zone category, which is for communities with critical levels of spread of the virus. As of Wednesday morning, Jessamine’s incidence rate was 28.2. Counties with a rate of 25 or higher are listed in the red zone.

Incidence rates are calculated using the seven-day rolling average of new cases divided by seven to get a daily average, divided by the U.S. Census Bureau county population and multiplied by 100,000 to get the incidence per 100,000 people.

Gov. Andy Beshear has issued guidance for red-level counties to follow to help mitigate the spread of the virus.

“It takes an entire community to protect the most vulnerable, to keep our schools open and to keep our economy running,” said Gov. Andy Beshear. “What we need to see is that when a county hits red, everybody comes together in a coordinated effort.”

Those precautions include working from home when possible, government offices operating virtually, reducing in-person shopping, ordering take-out or using drive-throughs at restaurants, prioritizing businesses that follow the mask mandate, canceling public and private events, not hosting gatherings of any size and avoiding non-essential activities outside the home.

As of Wednesday morning, at least 70 of Kentucky’s 120 counties were categorized in the red zone by the state.

“This is the worst our incidence rate map has ever looked and every indication would suggest that it’s going to get worse before it gets better,” said Dr. Steven Stack, commissioner of the Department for Public Health. “This is a human problem. A global problem. Everyone wants it to be over. But if we get cavalier about it, it’s like being at a casino – the house always wins. The virus is the house. When everyone flaunts the guidelines, they don’t work.”

Last week, more than 11,000 new cases reported, marking the most cases reported in a single week in the state since the pandemic hit Kentucky in March.

There have been more than 2 million tests performed in the state, with a 6.24 percent positivity rate.

At least 19,043 people have recovered in Kentucky.

Overall, the state is classified as in the red zone, according to the White House’s Coronavirus Task Force Oct. 25 report, which is the latest available.

The task force lists Jessamine County in the red zone as of the latest report.