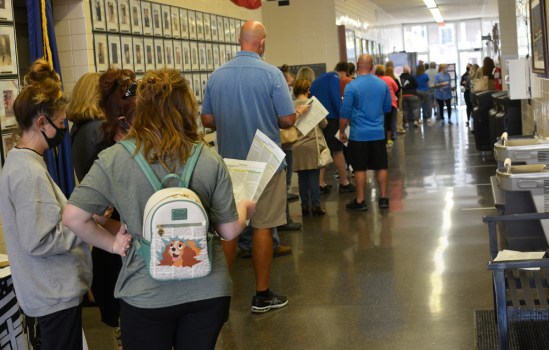 The line of early voters Friday afternoon outside the Jessamine County Clerk's Office stretched from one end of the courthouse to the other. Early voting continues through Nov. 2. 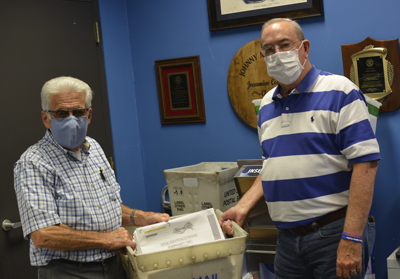 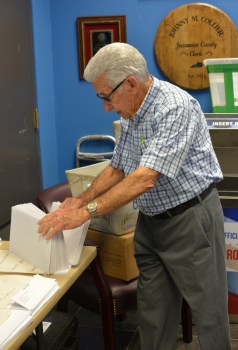 Last Friday was a busy election day in Jessamine County.

So has been almost every day since early voting at the courthouse began Oct. 13.

In fact, County Clerk Johnny Collier thinks more people may have already voted than will go to the polls on Nov. 3, the actual Election Day.

Early voting by absentee ballot will continue at the courthouse through Monday.

On a recent Wednesday afternoon, the line of voters, most of whom were standing a few feet apart to avoid getting or giving the virus, was stretched from one end of the courthouse to the other.

Collier said 5,000 had already voted at the five privacy locations in the County Clerk’s Office, and another 6,500 of the 9,000 vote-by-mail ballots sent out had come back already.

Because of the coronavirus pandemic, Secretary of State Michael Adams and Gov. Andy Beshear agreed to allow all voters to claim a medical exemption to in-person voting so that they could vote absentee, either by mail or at the courthouse. Some, however, will go to the polls on Election Day, which will be limited to six this year because of public health concerns.

Collier said he didn’t discourage people from voting on Election Day rather than by absentee ballot if they feel comfortable doing so. He said election officials have added two more polling places than they had in the June primaries to avoid long lines.

“If we have 15,000 people that have already voted and another 10,000 on Election Day, we expect that to go very quickly,” Collier said.

The county clerk mentioned that he had just received a new set of guidelines that day on voting during the pandemic.

“It strongly suggests that everyone wear a mask, but we cannot keep someone from voting if they don’t have a mask,” he said.

He said there will be markings on the polling place floors six feet apart just as there are at the courthouse for early voting.

Some have expressed concerns about mail-in ballots, but election officials of both parties say those fears are unfounded. Voter fraud, especially by mail, is extremely rare in this country, and Kentucky has many safeguards in place to prevent it.

For example, Collier said, signatures on the mail-in ballot envelopes are checked to make sure they match those on the voter’s driver’s license or voter registration card, and if someone were to apply for a mail-in ballot and try to vote at the polls on Election Day, he or she would be flagged by the e-poll computer when their driver’s license or other identification is scanned.

If someone is worried about their ballot getting lost in the mail, they can fill it out and bring it to the courthouse and drop it through the slot of a metal box.

If a ballot is rejected, it’s almost always because the voter made a mistake by not signing the inner and outer envelopes.

“Normally the thing people have the biggest problem with is forgetting to sign the outside envelope. If that happens this time, we’re calling them and telling them ‘You need to come in and sign your envelope,’” Collier said.

“I know a lot of people’s signatures never match completely, and as long as we can identify that signature belongs to that voter, we’re not going to kick it out,” the clerk said.

The signatures and ballots are looked at by the county board of elections members Glen Teater (Republican officer), Wini Yunker (Democratic officer), Sheriff Kevin Corman and Collier.

The mail-in ballots must be postmarked on Nov. 3 for them to be counted.