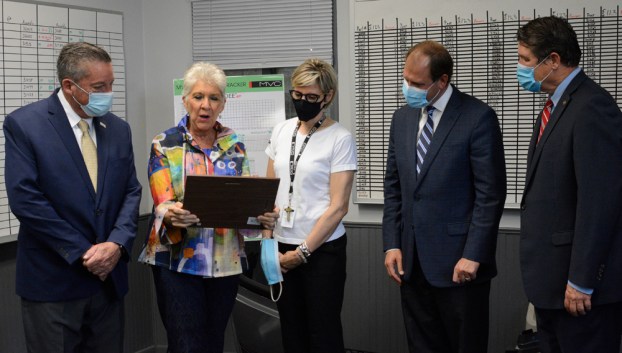 A $10.5 million loan from the federal government and other coronavirus relief aid may have saved McKechnie Vehicle Components from going under.

During a meeting at the Nicholasville automotive parts plant, Linda Torakis, majority owner and chief executive officer of the Nicholasville company, thanked U.S. Rep. Andy Barr, R-Ky., and others who helped get the funding the company needed to continue to operate and save 350 to 400 workers’ jobs.

“We wouldn’t be here without you guys,” Torakis said. “It is a game changer for us.”

Torakis and her husband, Mike Torakis, bought the company in 2008.

During a press conference Thursday at the Nicholasville plant, Torakis and others from McKechnie met with Barr, USDA Rural Development State Director Hilda Legg, who lives in Nicholasville, Mayor Pete Sutherland, Jessamine County Judge-Executive David West and other officials to celebrate the federal investment in the company and the local economy.

Barr thanked Torakis, her husband and their workforce for their perseverance during the economic downturn caused by the deadly pandemic.

“We’re here just to give you a little bridge on the other side to get through this difficult task, but I just want to compliment you and your team here, for all of your employees, for hanging in there, for fighting through the difficult times,” the congressman said. “We want this economy to recover so that we are as strong on the back end as we were on the front end, and with a little assistance here with these loan programs, I know you’ll get back there, and … come out stronger than ever before.”

In addition to the Rural Development loan, MVC has also benefited from the Payroll Protection Program that provided forgivable loans to companies that kept their workers employed and was a central component of the Coronavirus Aid, Response and Economic Securities Act.

The CARES Act provided trillions of dollars in relief for large and small businesses as well as payments to individuals and families to help them get through the crisis.

“This was unlike any other economic downturn,” Barr said, defending his support for the CARES Act. Rather than being a result of business cycles, the recession of 2020 was directly a result of government decisions to shut down sectors of the economy to protect public health, so it was only right, Barr said, that the government should provide assistance.

Through the Small Business Administration, the government provided payroll protection loans for more than 50,000 Kentucky businesses and more than $5 billion in emergency assistance for the state, he said.

During the press conference Barr told reporters that he supports another round of coronavirus relief, but Democrats and Republicans in the House and Senate and President Trump’s administration have not been able to agree on the bill.

“Not only did I cosponsor the bill, but I signed a discharge petition to force a vote on the House floor. I’m ready to go back to Washington at any moment if we can get a vote on this bill,” Barr said.

Barr said he thinks the next round should target the hospitality industry, restaurants, retail and other hard-hit sectors of the economy.

The Republican House bill he supports, he said, would also “streamline the forgiveness process” for the payroll loans.