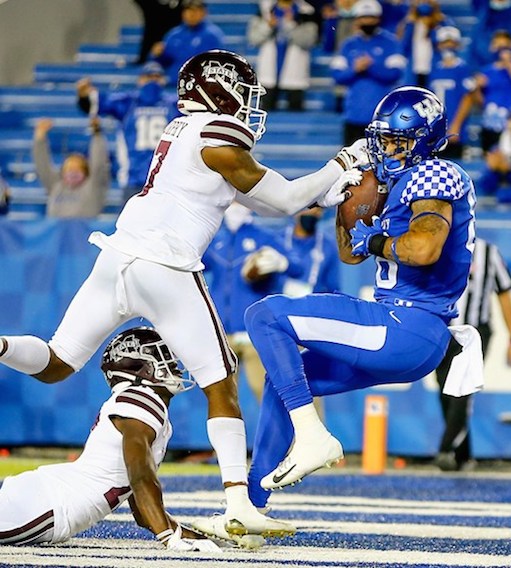 Kentucky has played Tennessee in football more times than any other opponent, with the border rivals having met on 115 occasions.

In fact, only two Southeastern Conference rivalries have been played more often: Auburn has played Georgia 124 times, and Ole Miss has squared off against Mississippi State on 116 occasions.

UK head coach Mark Stoops can’t — and doesn’t — worry about the history of the series. However, he was not happy with his team’s performance the last time his Wildcats went to Knoxville. Kentucky played at Neyland Stadium in 2018, with one of the better UK teams in recent memory. But on that day, the Cats had less than their best and the result was a 24-7 loss.

Stoops remembers that well and he hopes some subtle changes to the team’s schedule this week might make a difference.

“We do have a different change up. I didn’t like the way we played there a couple of years ago,” Stoops said. “We are doing some things different on Friday, with our schedule, and throughout the week. I’ll leave it at that. I’ve been thinking about it for some time.”

Kentucky outplayed Tennessee last season at Kroger Field, only to come up just short in the end. The Cats had two shots from inside the five yard line in the final minutes but were unable to get the go-ahead score, falling 17-13.

Stoops knows that the Cats were so close last season and that a couple of plays made the difference.

“You can look three, four competitive plays that they made that we didn’t,” Stoops said. “And that separated the win and the loss.”

Stoops acknowledges that the UK-UT rivalry is an important one.

“It’s important,” Stoops said. “It’s a team that you feel like, it’s on your side of the league. It’s a rival game, it’s your neighbor. It’s an important football game.”

The Cats are coming off a 24-2 win over Mississippi State on Saturday night, a game where the UK defense intercepted six passes and held the Air Raid offense without a point. That came one week after the Cats gave up 42 points to Ole Miss and were challenged to improve by the head coach. While Stoops was pleased with his team’s defensive effort against MSU, he was less than pleased with the offense.

“Offensively, we’ve got to get some things corrected,” Stoops said. “We need the offense to respond much like the defense did last week. We need to put it all together.”

The Vols are 2-1 after losing to Georgia 44-21 on Saturday. Despite that setback, Stoops has been impressed with the job Jeremy Pruitt has done since taking over the UT program.

“Looking forward to this opportunity with Tennessee, a very good team,” Stoops said “A team that seems to be more physical each year Jeremy is there. They’re getting better at each level. They are an improved football team. We are looking forward to the challenge.”

The Cats have seen Tennessee quarterback Jarrett Guarantano for the last few seasons, and Stoops is impressed with the Vols’ signal caller.

“I really respect him. He’s a tough guy,” Stoops sad. “He stands in the pocket and takes some shots. He can deliver the football down the field. They do a nice job of creating some matchups and then throwing some shot plays outside and deep and he has the arm strength to get it there, drop it in and give his receivers some chances to make plays.”

Stoops and the Cats hope that the offense and defense can come together this weekend at Neyland Stadium. It will take that kind of effort to win on Saturday against a tough, physical Tennessee team.