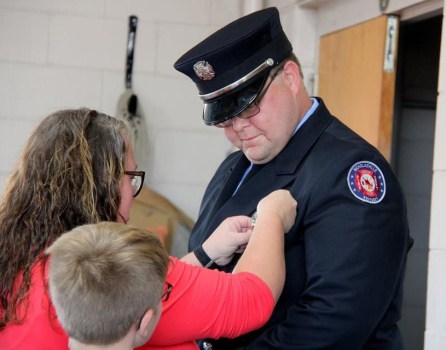 Tim May is pinned by his wife as their son watches on Sept. 27. 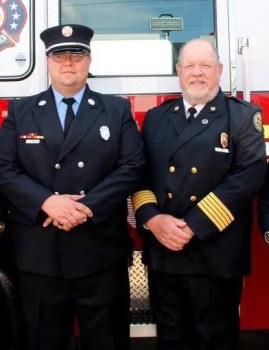 Lt. Travis May poses with his father, Tim May, who is a retired Lexington firefighter and currently Garrard County’s EMS director. 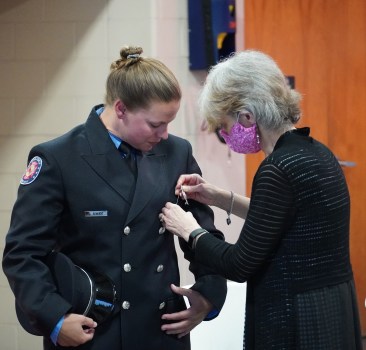 Lt. Loren Bewley has her badge pinned on her by her mom, Sandra Bewley. 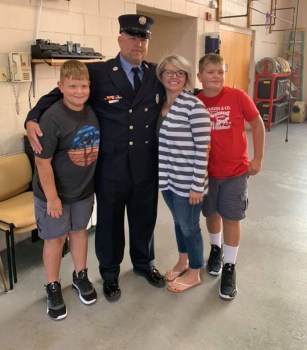 Lt. Donnelly Barnes poses with his wife, Becky, and their sons on the day of his swearing in as a new officer, Sept. 17. 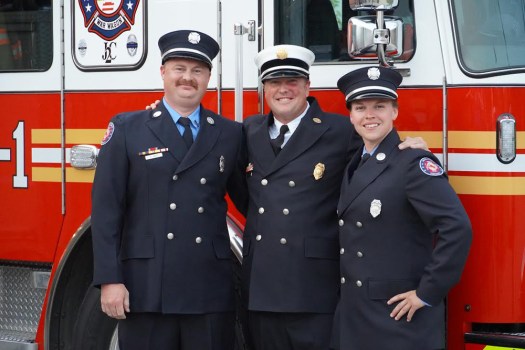 Capt. Michael Pierce and Lts. Aaron Davis and Loren Bewley were promoted to their new officer ranks on Sept. 16. 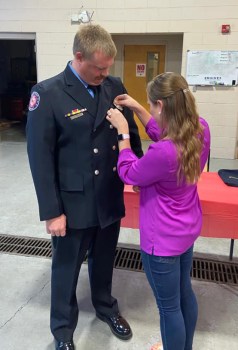 Lt. Aaron Davis receives his badge from his wife, Aubrey.

The Nicholasville Fire Department has a new captain and four new lieutenants, and one of the lieutenants is the first female officer in the department’s 185-year history.

Lt. Michael Pierce was promoted to captain, and four firefighters were promoted to lieutenant: Donnelly Barnes, Aaron Davis, Travis May and Loren Bewley, the first woman to attain that rank.

The officers, on three different platoons, were sworn in last month in three separate ceremonies to reduce the possibility of firefighters or their families contracting the coronavirus.

All of the new officers have worked for the department for some time, and most of them are from Jessamine or Garrard Counties and have family who have been firefighters, paramedics or EMTs in Nicholasville, Jessamine or Lexington. Davis’s stepfather, Bart Powell, for example, is retired from the Lexington Fire Department and is Emergency Management and EMS director for Anderson County. May’s father, Tim May, is also retired from Lexington and is Garrard County’s EMS director.

Nicholasville Battalion Chief Johnny Adams, who also works for the Jessamine County Fire District and is the county’s Emergency Management director, said Bewley, the first female officer, grew up and went to school in Jessamine County and is a graduate of Transylvania University. She is in her early 30s.

“Even though she had an opportunity to go to Lexington, she chose to stay here in this community,” Adams said.

He said she is someone who has trained other firefighters “while learning the ropes herself.”

Pierce is from Russell County, Barnes and May are from Garrard County, and Davis is from Jessamine.

“Firefighting has a rich history,” Adams said in an email, and the badge-pinning ceremony is a “proud tradition” signifying the introduction of members of the department to their new duties and position.

Each candidate is pinned by one of the most influential people in his or her life, such as a spouse, child, parent, senior officer or mentor.

“The ceremony is to recognize the hard work and dedication and sacrifices that a firefighter has for this calling and this community,” Adams said.

The Nicholasville Fire Department, led by Chief Mark Case, has about 50 employees and covers a service area of 13 square miles and a population of nearly 30,000.