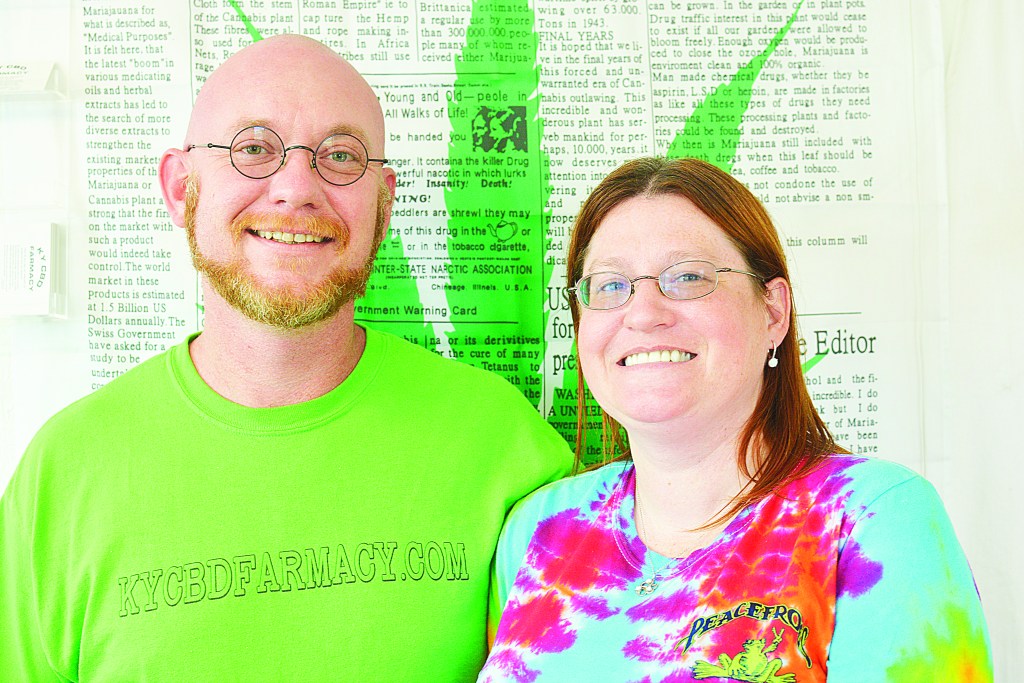 Robert Matheny was well into his spiel about the benefits of CBD oil when his phone rang.

The caller was disappointed that he didn’t have something.

“We fully support it. We just don’t carry it,” he said as politely as possible.

The it they were discussing was hemp flowers.

KY CBD Farmacy sells CBD oil and a variety of products infused with the oil, such as soaps and incense and foods, but it can’t sell the plant from which the oil is made.

Hemp, until a couple of years ago, was listed as a Schedule I narcotic under the federal Controlled Substances Act. Today, it’s a billion-dollar industry, mostly because of the popularity of hemp oil, or CBD, which Congress made legal  as part of the 2018 Farm Bill.

At the same time, however, Kentucky kept smokeable hemp illegal.

“Hemp and marijuana are the exact same plant, they just have different cannabinoids in them,” Matheny explained.

THC, or tetrahydrocannabinol, is the stuff that gets you high. CBD, or cannabidiol, couldn’t get you stoned if you smoked a shoebox full of it. But it’s in high demand because some users swear by its medicinal properties, even though the scientific jury is still out on those.

Matheny’s partner in the business and in life, Rachael Osland, is a believer.

“I lost my fiancé and my two children, and I’m the only survivor,” she said.

“I took a lot of physical therapy,” she said. “I was on so many pain medications because I needed it, but I didn’t want to keep taking it, so I had to find an alternative to release the pain.”

That alternative ended up being hemp oil. She uses it every day, placing it under her tongue.

“It’s helped with the pain, anxiety, PTSD, depression,” she said.

Their customers buy it for those conditions and others — Parkinson’s disease, epileptic seizures, inflammatory disorders, even the effects of cancer. But the FDA has warned that there is no evidence to support the notion that it benefits cancer patients.

Matheny said he and Osland started studying CBD because his mom had cancer, but it was “too late for her,” he said.

“You can’t promise somebody it’s going to cure cancer and give them false hope. You’ve got to be careful with that,” Matheny said. “All you can do is show them the tools, show them where to research and let them come to their own conclusions.”

“They try to discredit it, but there’s a lot of people having personal experiences with it,” Matheny said.

Many people who start taking CBD are able to stop using other medications, he said.

Hemp doesn’t hurt people, but it has hurt the pharmaceutical industry, Matheny said, and he thinks the FDA is trying to protect the big drug companies.

“It comes down to dollars and cents,” he said.

Matheny and Osland are not only CBD merchants at their store just off U.S. 27 South about three miles from Nicholasville, they’re also hemp activists.

And one thing they would like to see become legal in Kentucky, as it is in North Carolina and other states, is smokeable hemp, or hemp flowers.

“A large part of why our Kentucky farmers are having such a hard time in the hemp industry is that they don’t have access to the flowers,” Matheny said.

The flowers are less expensive than the oil, and some prefer it as a purer product.

“If 60 milligrams of CBD a day is what you require to feel better, I could get that to you at half the price with just the flower,” Matheny said. “You could make your own. You could ingest it.”

But it’s illegal, so the only way to get it is through the black market, people selling it under the counter at “gas stations and little head shops,” he said.

“If our farmers had the ability to sell that, we would have a wall of it here, and a lot more people would come in specifically for that,” he said.