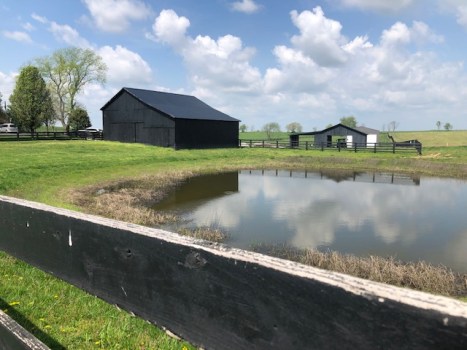 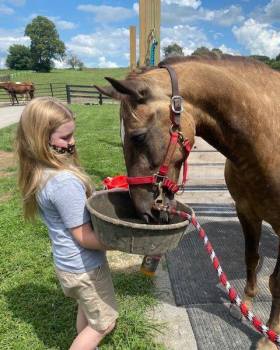 A girl feeds a riding horse at Justin’s Place. 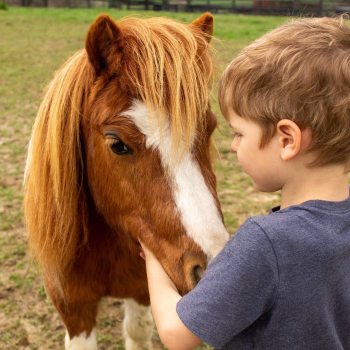 A boy makes friends with a miniature horse at Justin’s Place. 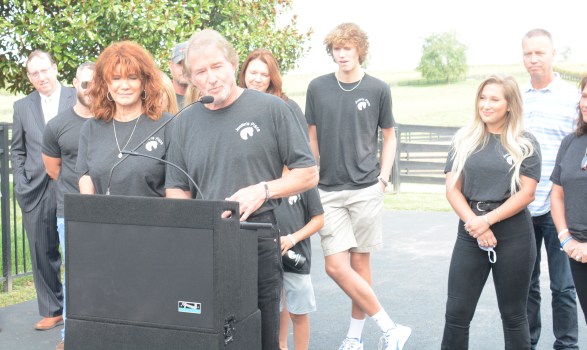 Lynn Alexander, who bought the farm on High Bridge Road for Justin’s Place, emceed the grand opening Sept. 15. With him are his wife, Rovena, and members of their family. 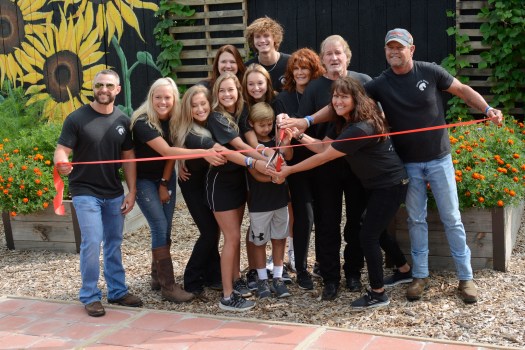 Members of the King, Alexander and Sato families take part of in the ribbon cutting for Justin’s Place. 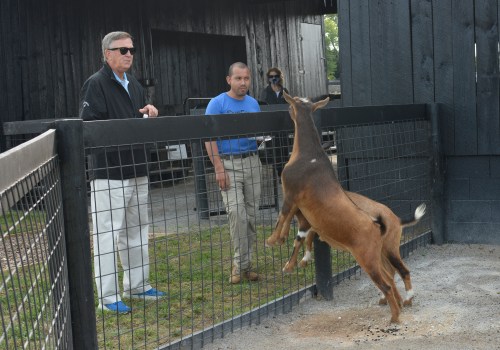 Mike Akers and Mario Cortez, who works on the farm, watch some playful goats. 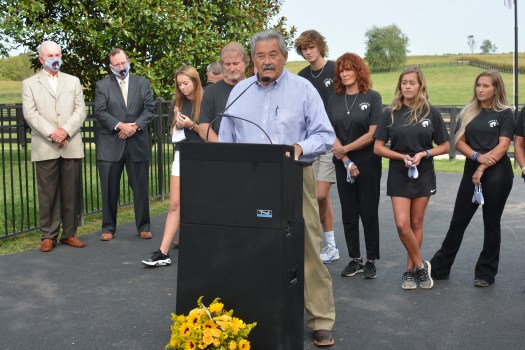 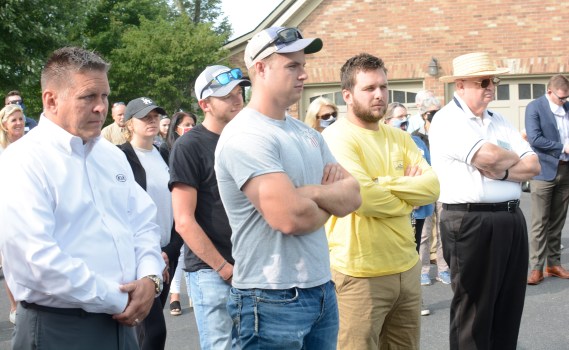 A crowd estimated at 80 to 100 people attended the grand opening of Justin’s Place Sept. 15 on High Bridge Road. 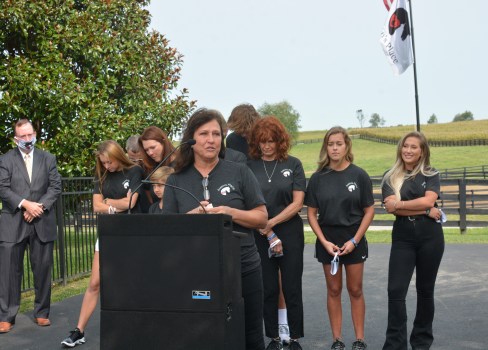 Kim King, mother of the late Justin King, for whom Justin’s Place is named, thanks all who came to the grand opening last week and those who support the place. 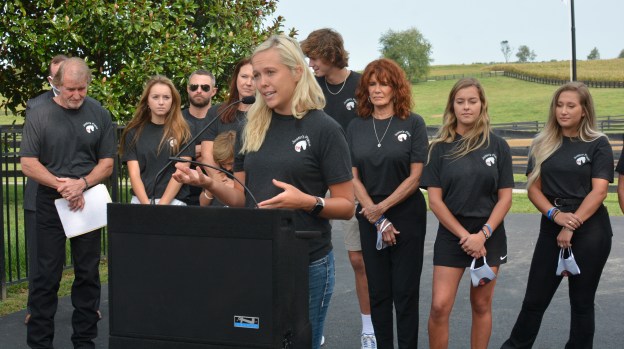 We will never know who Justin King might have become, but because of his family’s efforts to honor his memory, we can know who he was — a young man with a zest for life and a big heart who had a soft spot for kids with special needs.

Last Tuesday, a bright autumnal day, 80 to 100 people gathered for the grand opening of Justin’s Place, a therapeutic horse farm for children with autism and Down syndrome.

Justin’s grandfather, Lynn Alexander, who recently bought the farm on High Bridge Road from Clay Corman, emceed the event, surrounded by his wife, Rovena, and members of their family — Justin’s mom, Kim King; her husband, Robby, and their daughters, Madison and Bailee, and the Alexanders’ other daughter, Kasi Sato; her husband, Josh, and their children, Hudson, Alexan and Duke.

“I can’t help but think that Justin is watching this, that he’s looking down on us,” Alexander said. “I think he’s happy that special kids are going to be able to come here and leave with a smile …”

He welcomed Jessamine County Chamber of Commerce members and other guests, local dignitaries, volunteers and staff and supporters.

Alexander mentioned Mario Cortez, an farm employee, family members and others who “poured their souls into this” project.

In addition to being a working farm with longhorn cattle (the Alexanders are West Texans) and crops including hay, corn and soy beans, Justin’s Place also has a petting zoo with miniature horses, goats, sheep and pigs, exotic chickens and riding horses.

“God had a hand in every single move,” Alexander said, describing how it all came together.

Jon Weece of Southland Christian Church, the family’s pastor, gave the invocation, asking God’s blessing on the children who will be helped by the program.

“I love it that our community is home to something like this,” Justin Day, the chamber president, said.

“I think you see what a family that loves each other and loves Jesus can do,” said Wilmore Mayor Harold Rainwater, a member of the board of the Justin’s Place Foundation.

Allie Barnett, the 30-year-old executive director of Justin’s Place, is a registered nurse who sold her own horse farm in a day when she was given the opportunity to take over management of the Alexanders’ farm.

She said it was a privilege to work with the family.

“I wish I could send you mental images of everything I’ve seen here the past few months,” she said. “I wish I could let you hear all the belly laughs and see all the big smiles and hear the things parents have told me about growth and improvement at home, because then I wouldn’t have to say anything. You would just get it.”

What sets Justin’s Place apart, Barnett said, is that “everything we do here is tailor-made for each child.”

The kids get to choose three things to do during their time on the farm, such as riding or grooming a horse, playing in the sandbox, learning about pigs and goats or playing games. And they get help with things they have difficulty with, such as greeting an adult who walks into the room or working on their balance and coordination.

She called Justin’s Place a picture of Justin King’s “legacy to elevate and empower kids and create beautiful moments of peace and joy for kids.”

Born in Texas, Justin King graduated from West Jessamine High School . He was a walk on for the University of Louisville’s Cardinals football team and was about to transfer to Georgetown College to play there when in 2017, his life was cut short at the age of 21 by an automobile accident.

His family has described Justin as a happy person who liked to make others happy, and he loved kids with different abilities. He helped them at school, volunteered for the Jesus Prom at Southland and would take the time to pay attention to them whenever they were out and about.

One encounter he had with a little girl in a wheelchair brought a big smile to her face and left his family in tears.

Justin’s mom, Kim, was the last one to speak at the ceremony. She thanked everyone who made Justin’s Place possible, especially her parents.

“This wouldn’t be possible without them,” she said.

Justin’s Place is located at 3705 High Bridge Road, Wilmore, KY 40390. It can be found on the web at justinsplaceky.com and on Instagram and Facebook. To contact the farm, email hello@justinsplaceky.com.