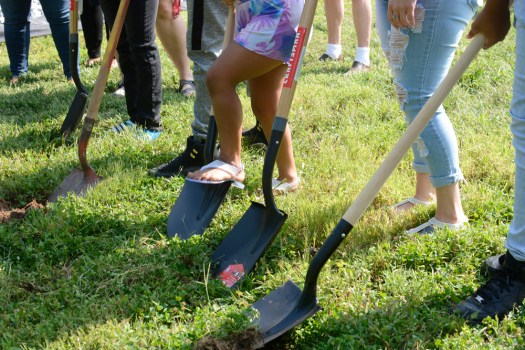 Habitat board members line up with shovels alongside family members to break ground for the newest Habitat for Humanity house in Jessamine County. The family asked that their images not be shown because of privacy concerns. 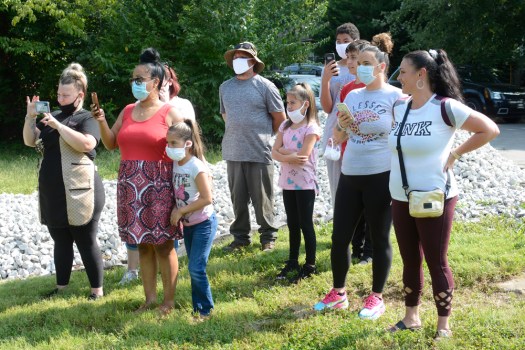 Friends and extended family of the new Habitat homeowners show their support. 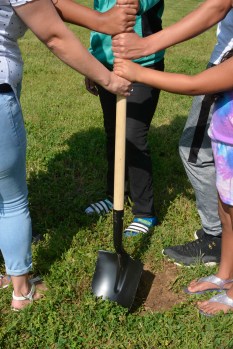 In a show of togetherness, the new homeowner and her children grasp a shovel during the groundbreaking ceremony Thursday. 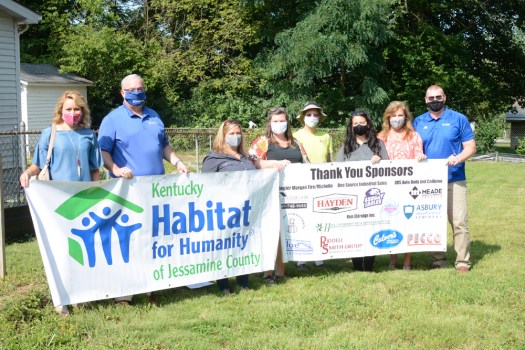 Board members and staff pose behind banners of the affiliate logo and sponsors.

A Nicholasville woman and her four children are the newest partners of Habitat for Humanity of Jessamine and Garrard Counties.

They, along with other family members and friends, were joined by Habitat board members, employees and others for a groundbreaking ceremony Thursday on Lorraine Avenue where their new house will be built.

For security reasons, the identity of the homeowner and her children could not be revealed, but she said that this is the first time in her life that she will own her own home, and she thanked those who are helping her make that possible.

“She has worked hard for her family, and now she has gotten a break,” the future homeowner’s father said. “God has finally given them a place to call their own.”

She will live in the house with her three sons and a daughter, her youngest.

“Now I can teach them how to mow,” her father said, kidding the youths.

Habitat for Humanity is a Christian ecumenical organization that began in Americas, Georgia, in 1976 and now helps families build their own homes throughout the United States and in many other countries around the world. The mission is to provide people of limited means “a simple, decent place to live” by using volunteer labor, often discounted contract services and building materials and no-interest mortgages over a 20-year period.

Habitat’s Jessamine County affiliate started in 1992 and built its first house that year. This will be their 17th home in the county.

Leanne Prout, executive director of the local affiliate that was formed in 2018 when the former Jessamine and Garrard groups merged, said the two counties currently have 38 Habitat homeowners.

“We are so excited to have you as our next … homeowners,” Prout said during the celebration Thursday. “We know you have worked very hard, and you have come so far with the help of everyone around you.”

“It’s always a blessing,” she said, to see someone “become a homeowner.”

“It’s so exciting to just get started” on the next house, Joanna Perdue, president of the affiliate, said.

She dedicated the event to her predecessor, longtime president Wayne Hayden, who recently passed on.

“He would loved to have been here and seen this,” she said. “This is a very special day.”

Bruce Holt will be the construction manager for the project.

Prout said work will begin on the house as soon as the affiliate can get contractors lined up for masonry, plumbing, heating, ventilation and air conditioning and other special skills.

Site preparation, framing, drywall installation and other work is normally done by volunteers and the homeowners.

There will be a fundraiser for the project on Friday, Sept. 25, at the Bluegrass Sportsman’s League on Handy’s Bend Road, Wilmore. Board member Amy Cloud said it will be a shooting event and a meal.