A graph from Kentucky Health News charts the number of cases reported in Kentucky each week since early March, which is when the first case of the coronavirus was reported in the state. 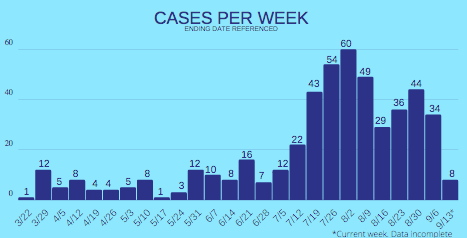 A graph from the Jessamine County Health Department charts the number of cases reported each week since March 22, when the first case of COVID-19 was reported in the county.

Coming off a second consecutive record-breaking week of coronavirus cases and a holiday weekend, state officials fear the worst: even more cases of the potentially deadly disease.

And as the state sees more and more cases, so do Jessamine and surrounding counties.

During the week of Aug. 31 to Sept. 6, Kentucky reported 4,742 new cases of the virus, even more than the previous week. The week of Aug. 24-30, which was previously the record-high week, there were 4,503 new cases reported.

The state has seen a steady incline of cases over the past six months.

“We’re facing the challenge of our lifetimes and we must do better,” Beshear said. “These past six months have been devastating for so many Kentucky families. These months also will be remembered as a time when Kentuckians lived up to our reputation as compassionate, resolute and resilient people who take care of one another.”

July marked a noticeable incline in cases, especially after the July 4 holiday,  jumping from 1,675 new cases the final week of June to 2,482 the first full week of July.

“Pleasant weather across Kentucky and a holiday weekend may result in more cases reported,” Health Commissioner Steven Stack said in a release. “We’ll know in two to three weeks.”

Over the past eight weeks, the state has not reported fewer than 3,700 new cases weekly.

The state also barely missed the 1,000-deaths mark. So far, there have been 997 deaths attributed to the virus in Kentucky.

As of Tuesday, 510 people are hospitalized for COVID-19 related reasons, 130 are in the ICU and 74 are on a ventilator.

There have been more than 10,000 cases of the virus reported in people age 20 to 29, which is the highest among the age ranges. The fewest cases remain among the younger than 9 and older than 80 range.

“As of Monday, at least 927,819 tests had been administered,” according to a press release from the Governor’s Office. “The COVID-19 testing positive rate, based on a seven-day rolling average, taking into account total positive tests reported by laboratories divided by total tests reported by labs, stood at 4.34 percent.”

At least 10,648 Kentuckians have recovered from the virus.

After nearly six months of COVID-19 activity in the community, Jessamine County continues to inch closer to the 500-case mark.

As of Tuesday morning, which is The Journal’s press deadline, there had been 495 positive cases reported in Jessamine County.

Of those cases, 23 were newly reported Tuesday, 39 remain active and 456 have recovered. One patient was hospitalized as of Tuesday.

Since Jessamine saw its peak in weekly cases in early August, the community has seen a slower but continuous rise in cases.

The week of Aug. 2, Jessamine reported 60 new cases, a record-high.

Since then, the Health Department has reported anywhere from 29 to 49 new cases weekly over the past five weeks.

There have been 4,570 drive-through tests performed at the Jessamine County Health Department as of Monday.

In surrounding counties, the case numbers as of Monday are: