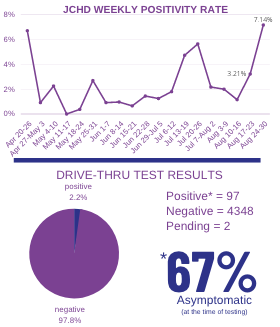 A graph from the Jessamine County Health Department charts the weekly local positivity rate, which is calculated by the percent of positive cases out of the total number tested.

A graph from the Jessamine County Health Department charts the number of cases reported each week in the community.

As of Tuesday’s COVID-19 summary issues by the Jessamine County Health Department, there have been 465 positive cases in the county.

Of those, 65 are active, 419 have recovered and one is hospitalized.

The majority of cases remain among the 18 to 30 range, with the fewest cases in the 80 and older range.

The Health Department continues to offer drive-through COVID-19 testing by appointment only.

As of Monday, the Health Department has conducted 4,447 tests with an overall 2.2 percent positivity rate. The week of Aug. 24-30, the county saw it’s highest positivity rate at 7.14 percent, according to the Health Department’s drive-through testing summary. That rate was more than twice as high as the rate the week prior, which was 3.21 percent.

Of those tested locally, 67 percent have been asymptomatic.

Last week, Gov. Andy Beshear reported more than 4,600 new cases in Kentucky, the most reported in a single week since the virus arrived in the state in March.

On Tuesday, which is The Journal’s press deadline, Beshear announced 817 new cases, bringing the state’s total to 49,185.

According to the state’s Aug. 31 COVID-19 summary, the majority of cases have been among the 20 to 29 age range.

There have been 948 deaths reported in the state. Nearly half (49.46 percent) of deaths have been among the 80 and older range.

There have been at least 887,547 tests administered with a 4.4 percent positivity rate.

Jefferson County remains a hot spot in the state, accounting for nearly a fourth of all cases reported.

Neighboring Fayette County has reported the second most cases, accounting for nearly 9 percent of all cases in the state.

As many districts return to school, the state has begun reporting positive cases among students and staff.

As of Aug. 29, the state had reported 304 student positives and 76 positives among staff members. Those numbers are representative of more than 60 districts across the state.

Another area of concern has been long-term care facilities, where there have been at least 3,415 positive cases among more than 300 facilities, along with at least 2,029 positive staff cases.

A travel advisory with a recommended 14-day quarantine remains in effect for those who visit states with a 10 percent or higher positivity rate. Those states include South Dakota, Iowa, Nevada, North Dakota and Alabama.