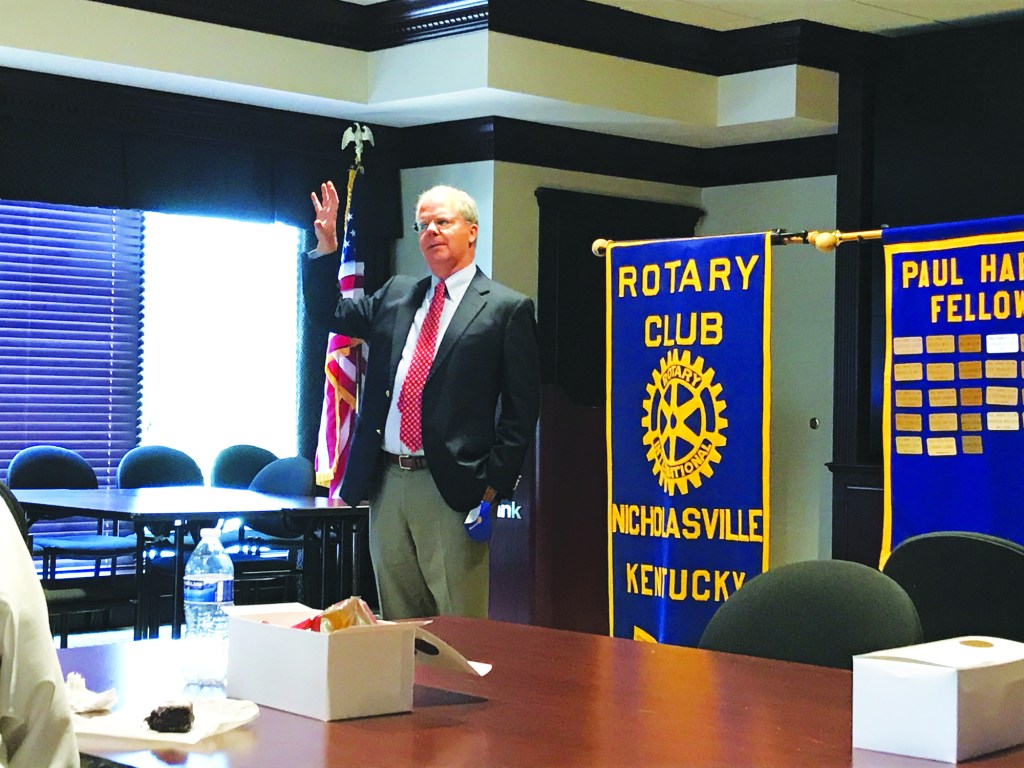 U.S. Rep. Brett Guthrie speaks to the Nicholasville Rotary Club Monday about the status of vaccines for COVID-19. Guthrie said he thinks a vaccine may be months away, with three in stage three trials at this point. (Photo by Fred Petke)

Congressman Brett Guthrie said he is asked all the time when life will return to normal.

Guthrie, R-KY-2, told members of the Nicholasville Rotary Club Monday that three companies already have a possible vaccine in stage three trials, each of which would involve 30,000 people, he said.

“They’re not skimping on the science,” Guthrie said. “It has to be with the best science.”

Guthrie, who serves on the oversight committee for the National institute for Health, Centers for Disease Control, said he believes a vaccine could be available by the first of the year.

One of the things that is helping the vaccine process is researchers were able to use data and DNA from SARS, MERS and H1N1 along with the flu.

“That’s why they can do it so quickly,” he said. “We’ve been working on it for a decade.”

All are examples of coronaviruses and share a common protein, he said. If the vaccine can neutralize that protein, then COVID-19 can be controlled.

Finding an effective vaccine would be key to life returning to pre-COVID patterns, he said.

“I don’t think we’ll get back to normal until we get a vaccine,” Guthrie said. “I think we’ll have it sooner rather than later.”

Whether the vaccine is ready by election day remains up for debate.

“I don’t want a vaccine before Nov. 3 that’s not safe and effective,” he said. “It’s good for everyone to have it sooner than later, but it does no good if its not safe.”

President Donald Trump has already authorized production of the three vaccines before final approval by the Food and Drug Administration, he said, so the vaccines would be ready to be distributed when they are approved.

“That we’ll have a vaccine within a year of a pandemic is remarkable,” Guthrie said. “That being said, all three could fail. I think the odds are really low.”

Guthrie has represented the second district, which includes a portion of Jessamine County, since 2008. He is running for re-election this year.