Readers sound off on return to school athletics 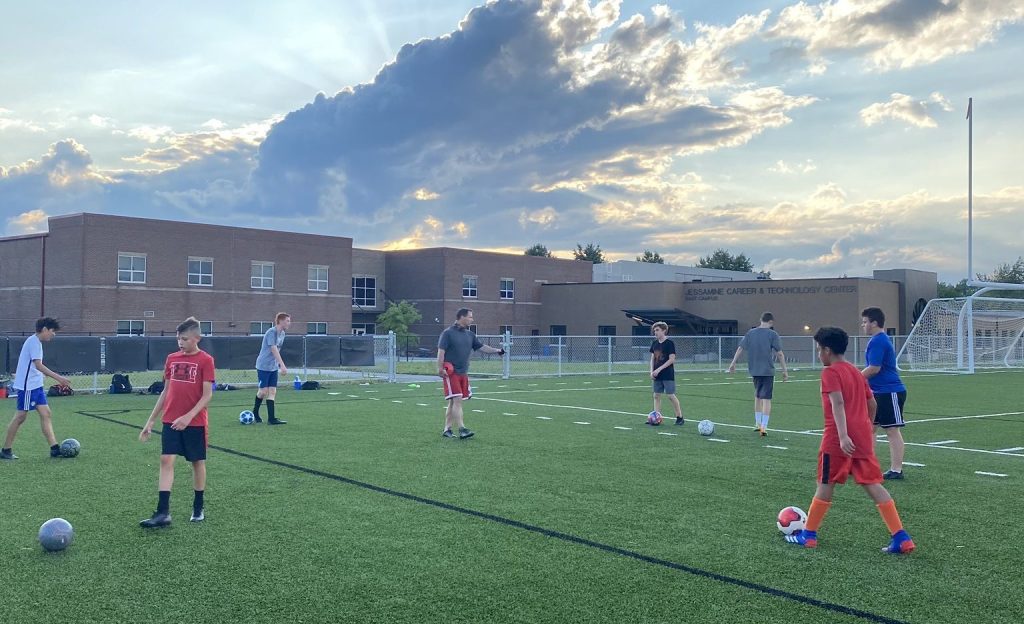 The East Jessamine Jaguars soccer team is shown at a recent conditioning practice. The school board decided Monday night to allow sports teams to begin full practice immediately and competition on Sept. 7, except for football, which resumes Sept. 11.

Tuesday afternoon, The Jessamine Journal posted on its Facebook page the following question:

Do you agree or disagree with the decision by the Jessamine County Board of Education and Superintendent Matt Moore to allow school sports to resume Sept. 7 and, for football, Sept. 11?

Here is what some of our readers said.

Bridgette Gregory was happy about the decision.

“Yes! The kids need to feel normal again!” she said.

“I agree with the decision,” Wendy Adkins said. “The kids need to get back to some semblance of normalcy for their physical and mental wellbeing.”

“I know the coaches are taking the necessary precautions to ensure student safety as much as they can,” said Amanda Baber, who also agreed with the decision.

She said her son had been attending football conditioning and her daughter gymnastics since June, and she said she was happy that they could interact with others and be physically active.

Jennifer Richmond, a single mom, pointed out that high school sports can provide an opportunity for some kids to go to college, and she said it wasn’t fair to those like her son who “have worked many years for this time in their life.”

She said her son “deserves to have positive male role models” and a “sense of family.

But others differed with school officials over their decision.

Mike Henderson, who identified himself as a referee for a fall high school sport, said: “I miss the games and the people, but it doesn’t seem wise to play right now.”

Missy Roberts, who said she was the parent of a child who played varsity soccer for four years and another who  is playing junior varsity now, also opposed the decision.

“Sports is not life. … I hope they know what they are doing,” she said.

Roberts said she had a child who got COVID-19, although he had only mild symptoms.

“Parents are gambling with the virus, which could be a serious tragedy for their entire family,” she said. “Football is a contact sport, and personal contact is what spreads the virus. It’s just common sense, not fear.”

Some went further than commenting on the decision about sports and called for school officials to rethink their decision to have the first two weeks of classes, which began Monday, to be virtual rather than in schools.

“I completely agree with their decision, and I wish that we were still going back to school with the options that we chose as well,” Jessica Combs said.

“If they can play sports, then they should be able to attend school in person,” said Jeannie Bengie Smith.

“Take them out of the bubble, wash your hands, wear a mask and don’t be in each other’s faces. It’s fairly simple, really,” she said.

“The continued closure of schools is ruining the state’s greatest resource — our children,” Stephanie Clarke said.

“Everything needs to open back up,” said Bobby Chaplin.

Others disagreed about the decisions on both academics and athletics.

“If the numbers keep going up like they have been, I say stay closed longer,” Valarie Stone said.

It is not worth the risk to a student’s life and health, she said.

“Lexington Catholic opened up for in-class and closed three days later because of positive tests from classmates and staff,” she noted.

Brittany Robinson also cited the decision by Lexington Catholic to close so soon after reopening. She said it would be frustrating for the students to go to school, return home and then go back.

Editor’s note: The comments were edited only for grammar, spelling and punctuation or to shorten or paraphrase them.