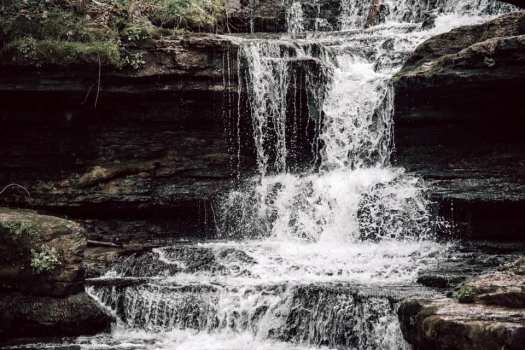 The 155-acre nature preserve in the Jessamine Creek watershed offers wildflower viewing in the spring, summer and fall, and views of the palisades in the winter. (Photos by Brack Duncan) 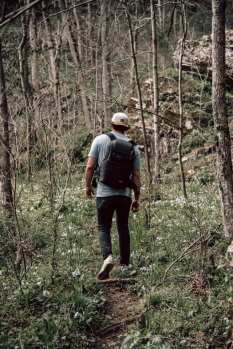 Jessamine Creek Gorge has been a popular destination for hikers and sightseers this year, but because many visitors have not been following the rules to keep them safe and preserve the area, the Jessamine County Fiscal Court has limited access to the area to scheduled time slots and guided tours. (Photos by Brack Duncan)

With so many other recreational opportunities restricted because of the concerns over the coronavirus, many people are turning to the great outdoors this summer for exercise and enjoyment.

Jessamine Creek Gorge has been a popular destination for hikers and sightseers this year, but many visitors haven’t been following the rules intended to keep them safe and preserve the beauty and ecology of the nature preserve located near Wilmore and the Kentucky River Palisades.

For this reason, the Jessamine County Fiscal Court wants to limit hiking in the preserve to families and other groups who reserve it for “blocks of time,” and allow only guided tours, County Judge-Executive David West said.

That would give officials a better idea of “who’s down there,” and be able to accurately report usage, he said.

The judge and magistrates discussed the issue at the Fiscal Court meeting Aug. 4.

Raven Run requires reservations because of COVID-19 and the need for social distancing.

Lower Howard’s Creek only allows reserved guided tours except on its John Holder Trail, which has been closed because of environmental damage.

West said that damage is a concern for Jessamine Creek Gorge trail as well.

“The big problem … was people who were going off the trail,” he said.

They were also climbing the cliffs and going to the waterfall, which is off limits because it can’t be accessed without trespassing on other people’s property.

“At the end of the day, it’s about preservation,” he said.

He said county officials want to allow no more than nine people at a time to use the trail for guided tours.

Other restrictions include no going into the creeks, no visiting the waterfall, not allowing any pets, not leaving trash behind, requiring that people stay on the trail and parking only in the lot, not along the road.

Last summer, a 22-year-old woman had to be rescued when she fell 50 feet and was injured while hiking in the Jessamine Creek Gorge.

John Howard, cofounder of the Jessamine County Trails Association, said there has been a problem for many years with people not following the rules for use and conflicts with neighbors.

“It is a nature preserve, it’s not just a trail,” he said. “The sheer volume of hikers has caused some issues.”

The 155-acre nature preserve in the Jessamine Creek watershed offers wildflower viewing in the spring, summer and fall, and views of the palisades in the winter.

The Jessamine County Fiscal Court purchased the nature preserve property in 2005 and manages it through an agreement with the Nature Conservancy. It opened its two-mile trail in 2011.

The preserve was closed earlier this year because of the coronavirus but reopened July 1.

It is generally open from dawn to dusk, but county officials are looking at changing its hours.

From Nicholasville, the preserve can be reached by taking U.S. 27 south of town, turning right on Bethel Road (Ky. 1269) for 2.6 miles, turning left onto Corman Lane and going 1.1 mile, where there is a Jessamine Creek Gorge Trail sign on the left and an unmarked parking lot on the right.

More information is available by calling the Jessamine County Trails Association at 859-221-4497, emailing jessaminecotrailsassoc@gmail.com or visiting online at jessaminetrails.com/jessamine-creek-gorge-preserve.