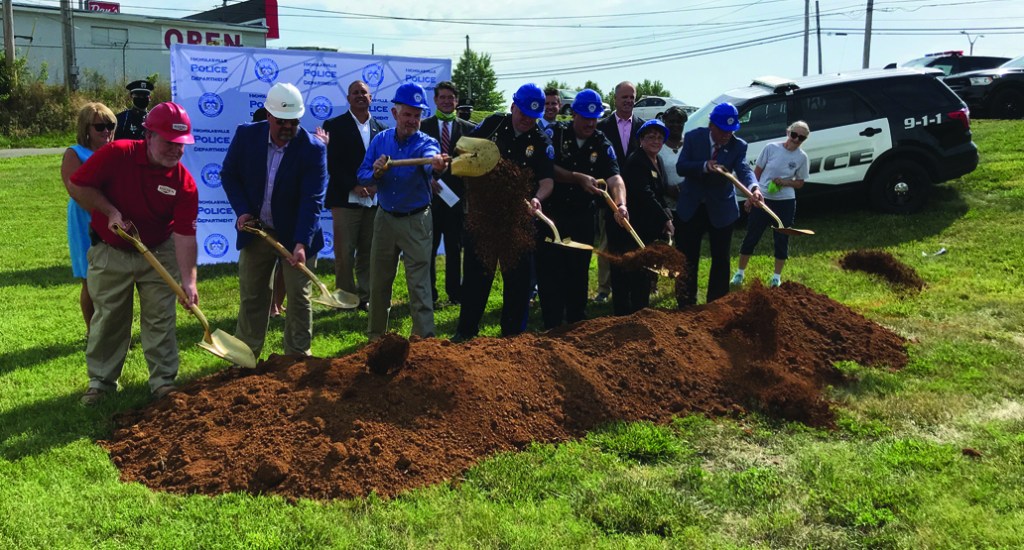 City and construction officials broke ground Thursday on the new Nicholasville Police Department on Norht Main Street. The $7 million project will build a 25,000 square foot building on property originally purchased for a new city hall. Construction is expected to take about 14 months. (Photo by Fred Petke)

For more than three decades, the Nicholasville Police Department worked from a former car dealership it shared with the city fire department.

Through those years, there were lots of discussions about needing a new station, Chief Todd Justice said.

The day finally arrived Thursday, as city officials broke ground for the new department, which will be on North Main Street.

“What a joyous day,” Nicholasville Police Sgt. Kevin Grimes said. “Many of us have been waiting for this most of our careers.”

Since the department moved into its current station in 1983, Justice said the force has grown from 15 officers to 72 officers and staff today. The station remained the same 3,500 square feet, he said.

“It is a place the community can be proud of and sends a strong message to our community that we care about their safety,” Justice said.

The property was originally purchased in 2007 for a new city hall, state Rep. and former Nicholasville mayor Russ Meyer said. Those plans were put on hold when the recession hit in 2008, he said.

Building a new police department has been a priority project for years, Commissioner Betty Black said.

“We’ve waited that long and had to put it on hold for the economy,” she said. “We are fulfilling our commitment to them. Thank you for being patient.”

The excitement from city leaders was hard to hide Thursday.

“Wow! Who’s excited for this today?” Mayor Pete Sutherland said. “These folks have been working in a remodeled car dealership for over 25 years. We have been talking about this for 25 years.

“I’m so excited I can hardly stand it. I can’t wait to see dirt start moving.”

Construction is estimated to cost around $7 million, Justice said, and the building should be finished in 14 months.