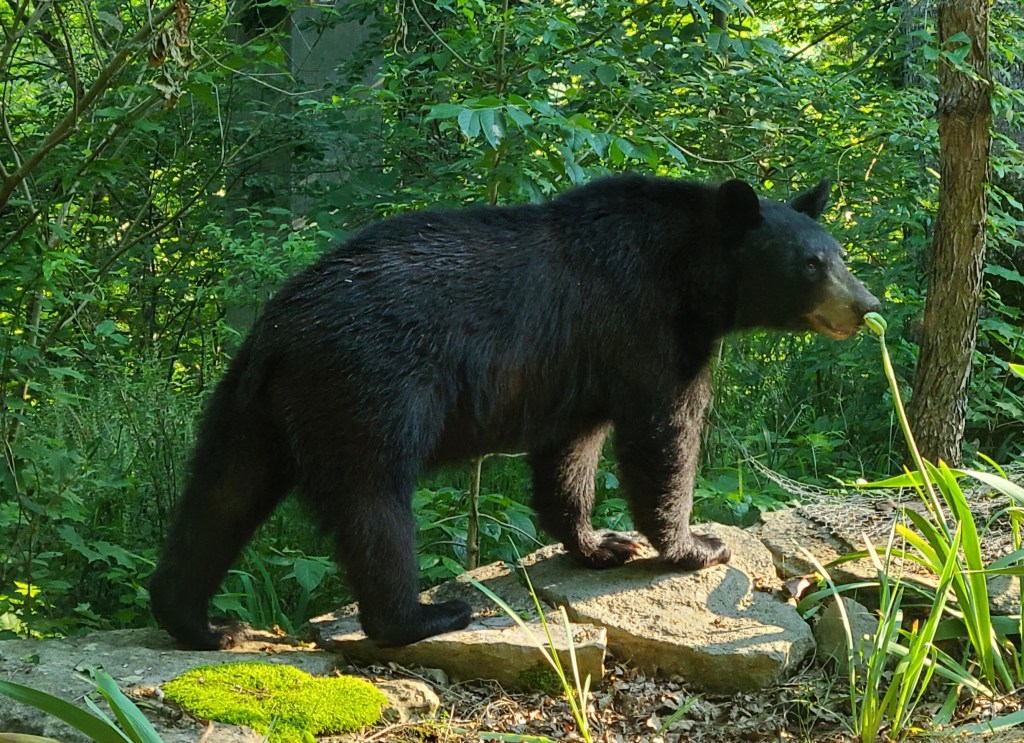 Tom Lowery took this photo of a black bear on a private road off of Grimes Mill Road near St. Hubert's Episcopal Church in Clark County. There have been other sightings in the Boone Creek and Kentucky River region in Jessamine, Clark and Fayette counties this summer.

The appearance of a black bear on the University of Kentucky’s campus last week got plenty of attention, but bears have been sighted all over Jessamine, Fayette and Clark counties this summer.

Or maybe it’s the same bear. The young males do get around.

John Hast, a biologist for the Kentucky Department for Fish and Wildlife Resources, thinks it’s one or maybe two bears that have accounted for all of the recent sightings.

When he gave an interview last Wednesday, July 1, he didn’t yet know about the bear seen at UK near the medical center, but the day before, there was one seen on Old Richmond Road about where it goes under the I-75 bridge at Clay’s Ferry. It was wandering across a pasture and someone took a picture of it.

That made six confirmed reports, he said, of a bear in the three counties.

On June 3, some farm workers were setting tobacco when they spotted a black bear on Todds Road in Fayette near the Clark County line, and one of them got a closeup picture of it in a tree.

The same day it was seen near Winchester Road, not far from the Hamburg Pavilion mall.

It had been seen the day before on a softball field at Athens-Boonesboro.

On June 19, game cameras on a farm on Jones Nursery Road in Clark County captured images of a black bear that was also photographed by other landowners in the area.

Around the same time, Tom Lowery got a picture of a black bear, probably the same one, near Grimes Mill Road and St. Hubert’s Episcopal Church.

In Jessamine County, Danny and Debbie Middleton of River Road near the Valley View Ferry returned home May 30 to find that something had turned over their garbage bins and eaten the food out of their dog dishes.

One of their daughters jokingly asked, wouldn’t it be something if it were a bear?

So they looked at the security camera video, and sure enough, that’s what it was.

“It played around in our yard for about four hours,” Danny Middleton said.

“He just came and made himself at home.”

Hast hadn’t heard about the Middletons’ bear encounter, but he wasn’t surprised.

“We’ve had a verified bear sighting in Jessamine County every summer since 2016,” he said. “Most of the time, it is right down there along the Kentucky River.”

Hast said every bear photo he has seen this summer has been of a lanky young male, about two or three years of age and weighing about 150 pounds. That’s a good description of a bear that would be in the Bluegrass this time of year.

Young black bears will roam 100 miles or so in the summer, feeding and hoping to find a mate.

What happens, Hast said, is that they get “bounced out” of their usual territory by dominant older male bears during mating season because if they stay, the big bears will kill them.

Also, the mother bears chase them away to prevent them from inbreeding.

So the young bears enjoy some summer travel.

“They’ll usually return back to the mountains in the fall,” Hast said.

Black bears, once rare in this part of Kentucky, have made a comeback in the past 20 years or so.

Hast said that in 2006, Fish and Wildlife began documenting reproduction of bears on Pine Mountain in Letcher County, and now there are are 450 or so in two core groups — one in Bell, Harlan and Letcher counties and the other in McCreary and Wayne counties.

“We’ve got a healthy, growing bear population in our mountain counties that has expanded,” he said, and now they are making their way into our neck of the woods.

The KDFWR website says that, while bears may appear calm and not threatening, they should be treated with respect because they are wild animals with unpredictable behavior.

Bears usually aren’t aggressive, but most attacks involve food, so people shouldn’t feed them or leave food where they can get to it.

One should never approach a bear or run from one, as that will trigger the bear’s instincts to chase. Instead, one should slowly back away or raise one’s arms to appear bigger and yell at the bear or use something to make noise to frighten it away.