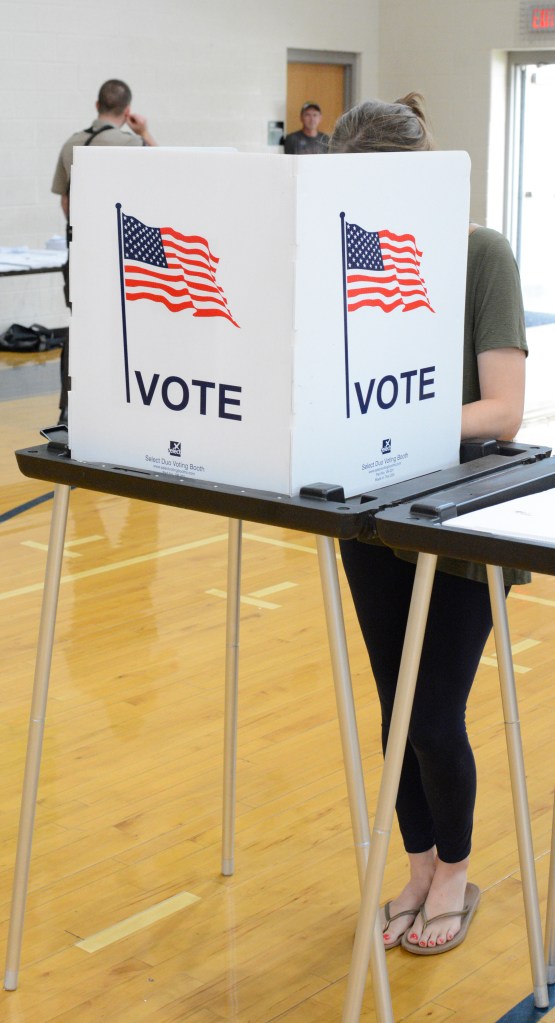 A Jessamine County voter fills out her ballot from the privacy of a voting booth at East Jessamine Middle School Tuesday. Turnout was light at all four polling places, but the County Clerk's Office mailed out nearly 12,000 absentee ballots.

In what one longtime election official described as the lowest voter turnout for a primary election he had ever seen, many of those who showed up at East Jessamine Middle School Tuesday to cast their ballots in person had one thing in common — they didn’t trust mail-in voting.

“If you can go out to Walmart … you can go and vote,” Charlie Warfield said. He and Nick Tecau were wearing their masks and keeping their distance from other people just as they would at the grocery.

“Nope. I don’t trust it and I ain’t doin’ it. Absolutely not,” Annie Barnett said when asked why she didn’t mail in an absentee ballot.

Thelma Neal said she didn’t think the absentee voting process was “completely honest,” despite the reassurances of Republican and Democratic officials.

Nearly 27 percent of Kentucky voters requested an absentee ballot this year when the governor and secretary of state agreed that every registered voter this year could do so for a medical reason — the novel coronavirus.

In Jessamine County, it was 1 percent higher.

“Turnout has been much less than expected,” she said, and one big reason is the number of people who decided to vote by mail or by absentee machine at the clerk’s office. She thinks fear of getting the deadly respiratory disease kept many away from the polls. “I think that’s a lot of it,” she said.

Jerry Harmon, who has worked elections for many years, said he had never seen a presidential primary election with so few people at the polls.

“In five hours, we’ve had 317,” he said, referencing the number who had voted by 11 a.m. at East Middle, one of four voting places in the county.

The others were Wilmore and Nicholasville Elementary Schools and Southland Christian Church.

The County Clerk’s Office reported Monday that turnout was low throughout the county. Only 3,161 people voted in person at the four locations.

Two voters at East Middle presented a study in contrasts.

Clarence Barnett, a gray-haired man, was voting for the first time in his life, at his wife’s urging, to show his support for President Donald Trump.

“I never thought about it,” he answered, when asked why he had waited so long to cast his first ballot.

Mike Kanotz’s attitude was the opposite.

“I have never missed a vote in 60 years,” he said, and he wasn’t going to miss this one. But he wasn’t convinced it would matter in November.

Kanotz said he is a registered Democrat, but added, “I don’t see any of the Democrats I voted for today winning” on Nov. 3.

County Clerk Johnny Collier said Jessamine County won’t know who the primary winners are until June 30  because mail-in ballots were being received through June 27 as long as they were postmarked June 23, and election officials must have them counted by June 30.

The total election results will be publicly announced Monday at noon in the Fiscal Court’s meeting room at the Jessamine County Courthouse.

Although President Trump and former Vice President Joe Biden have already secured the electoral votes they need for their parties’ nominations, there were some competitive races on the ballot in Jessamine County Tuesday, including for Nicholasville City Commission, the Republican nomination for state representative and the Democratic nomination for U.S. Senate.

If the results from absentee ballots show the same results as those from the polling places, then Alex Carter, Bethany Brown, Patty Teater, Betty Black, Dexter Knight, J.R. Allen, Andy Williams and Mikey Garrett will advance to the general election in the contest for City Commission.

Charles Booker  overwhelmed Amy McGrath in the Democratic primary in Jessamine for the U.S. Senate race based on machine votes alone, and Josh Hicks bested Daniel Kemph in machine votes for the Democratic nomination for the U.S. House 6th District. Senate Majority Leader Mitch McConnell and Sixth District Congressman Andy Barr did not have any serious opposition in the Republican primaries.