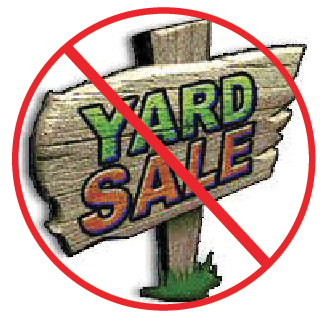 As the weather turns warmer in June, yard sales spring up like tigerlilies.

Unfortunately, for those who enjoy rummaging through other people’s discarded things in hopes of finding treasures, yard sales and garage sales are not allowed now.

Blame it on the coronavirus.

Public health officials say yard sales are especially problematic because the most effective weapon in waging war against the highly contagious and sometimes deadly virus has been getting people to limit contact with other people, including from one household to another.

Gov. Andy Beshear was asked the question at his daily news briefing June 3, and he gave an unequivocal no.

“Not yet,” the governor said, answering a written question about the sales. “We’re looking at when that could be. Obviously, the cleaning and the PPE and other requirements are a lot harder on yard sales, and it’s also people’s stuff that has been touched that other people are coming up and touching, so we’ve got to make sure.”

Until that public statement, there had been some confusion about whether they were permitted. They had not been specifically mentioned in the governor’s guidelines, but many assumed they were included in the lifting of restrictions on non-essential retail that were lifted May 20.

That’s what Lisa Bolton, the environmental director for the Jessamine County Health Department, thought at first. She said the staff had been responding to complaints and answering questions from sellers who wanted information. They were advised to practice the same safeguards as other retailers, including wearing masks and social distancing.

It turned out that was wrong, County Public Health Director Randy Gooch said.

“They have not been allowed yet,” Gooch said.

He said people expected that when retail reopened, yard sales would as well, but the governor has since clarified the issue.

“I don’t think there have been any specific guidelines for yard sales yet,” Gooch added.