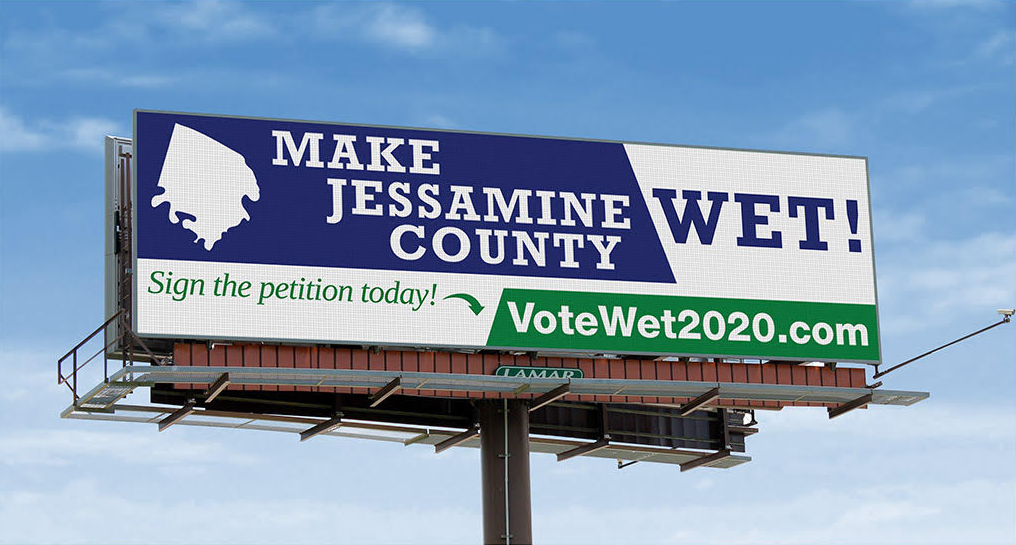 A billboard on U.S. 27 urges Jessamine County voters to "vote wet" in the Nov. 3 election. A campaign is underway to get an initiative on the ballot to allow alcohol sales in all of Jessamine County except Wilmore. They are already allowed in Nicholasville and at golf courses and wineries in unincorporated parts of the county. (Photo submitted)

Less than five months from the Nov. 3 general election, the campaign to “make Jesssamine County wet” is getting a flood of signatures on its petition.

The campaign needs the signatures of 4,733 registered county voters — 25 percent of the number who voted in the last election — to get the question on the ballot of allowing alcohol sales in the unincorporated part of the county, meaning all of the county outside the city limits of Nicholasville, which is already wet, and Wilmore, which isn’t and wouldn’t be affected.

They’re almost halfway to where they need to be to get the ballot initiative, and ahead of where they were last year, said her husband, Tom Jameson, owner of the Bellerive Plaza on Harrodsburg Road at the Fayette County line and Lexington’s city limits.

Last year, the effort needed about 5,500 signatures and fell a few hundred short, but this year, they got an earlier start and the bar is lower.

Jameson said allowing package alcohol sales and alcohol by the drink in Jessamine County would allow the Kroger in Bellerive to sell beer in the grocery and make it more attractive to restaurants that want to offer alcoholic beverages with their food.

There is little retail business in shopping centers like his these days, he said, because everything can be purchased on the internet. Services, such as restaurants and bars, are the future.

“We have all this vacant retail space here, and there’s no longer going to be dress shops,” he said.

A Mexican or Chinese restaurant would be a good fit for those empty spaces, he said, but they won’t locate there without a beer or liquor license because the margin on food alone isn’t enough for a dine-in restaurant.

“Even sandwich shops won’t come if they can’t sell beer, because alcohol sales are about 40 percent of their sales,” Jameson said.

Duncan Taylor, owner of Taylor Made Farm, a race horse operation, said allowing alcohol sales in the county would boost rural tourism and would allow him to charge for drinks at events at the farm. As it is now, if someone wants to buy a drink, he has to send them across the road to his golf course.

Taylor, who describes himself as “pro-business,” said it would encourage economic growth to allow people creative ways to develop businesses in the rural and suburban parts of the county. Not allowing it would discourage growth, he said.

“It would stunt anybody from  building whatever they are thinking about building in the county,” Taylor said.

“I think there are a lot of people who would like to come and enjoy our beautiful county and do business here,” he said, if they could enjoy alcoholic beverages during their visit.

The Jamesons, Taylor, Chamber of Commerce Executive Director Ronda May and Pastor Max Vanderpool, a member of the Ministerial Association, said they are unaware of any organized opposition to the campaign.

On the Make Jessamine County Wet 2020 Facebook page, there have been a few comments against a wet-dry election, but more have been for it, and some of the opponents mistakenly thought it would allow alcohol sales in Wilmore.

Tom Jameson said what’s about to change in the campaign’s approach is “we’re getting ready to put boots on the ground.”

They’re going to have tables at Kroger and other retailers.

“We’re going to have sign-up sheets at their point of sale, and we’re really going to push to get this over the top as soon as possible,” he said.