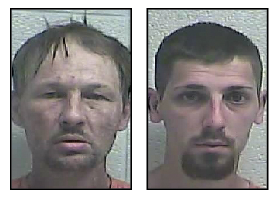 Officers seized heroin, other drugs and more than $12,000 in cash after arresting two men Friday for allegedly selling illegal drugs.

According to Nicholasville Police, officers with the Nicholasville-Jessamine County drug task force executed a search warrant Friday morning at a travel trailer parked in the driveway at 1007 Clyde Drive.

The location, police said, was the site of a number of complaints about drug activity to both Nicholasville Police and the Jessamine County Sheriff’s Office.

When officers arrived, they found 25-year-old Jordan S. O’Neal and 39-year-old Christopher O’Neal inside the trailer.

Jordan O’Neal was arrested and charged with trafficking in a controlled substance (heroin), possession of a handgun by a convicted felon and possession of paraphernalia.