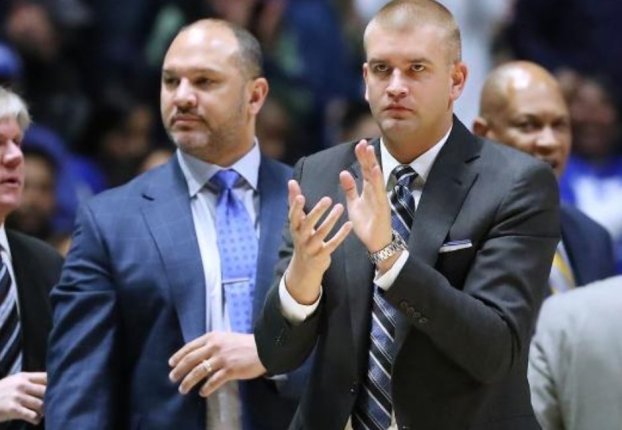 UK assistant coach Joel Justus is starting to gain recognition as one of the top assistant basketball coaches in the country. (UK Athletics Photo)

Justus ‘coming into his own’ and starting to earn national respect

LEXINGTON, Ky. (KT) — Joel Justus is gaining respect from his peers as one of the top assistant coaches in the country and he received a a big honor Wednesday.

Justus was listed No. 25 on a list of one of the top assistant coaches under 40 by ESPN. The list was compiled by ESPN writers Myron Medcalf, Jeff Borzello and John Gasaway and all coaches had to be less than 40 years-old.

“I think I have the best staff in the country,” Kentucky coach John Calipari said. “Joel is one of the brightest and hardest working coaches in our game and has really come into his own. Kenny (Payne) and Tony (Barbee) are both regularly mentioned as head coaches elsewhere. All three could be leading their own program, including this one.”

Justus was listed as a finalist for the top post at East Tennessee State University recently and has been an assistant under Calipari since the 2014-15 season. Justus has been instrumental in piecing together the school’s recruiting classes since he joined the staff as director of analytics. East Tennessee hired interim coach Jason Shay to replace Steve Forbes last week. Forbes replaced Danny Manning at Wake Forest last week.

The assistant coach helped sign incoming freshmen BJ Boston, Terrance Clarke, Devin Askew, Isaiah Jackson, Cam-Ron Fletcher and Lance Ware. Most analysts listed the class as one of the top classes in the nation. Boston was named Mr., Basketball in California and also was part of the Naismith All-America team. He also was a McDonald’s All-American. Boston, Jackson and Askew were Jordan Brand Classic selections.

“I think anytime that you can collect a group of people that want to play with other really good, talented players, that’s going to fit Coach Cal’s dream class every single year. We try to put that together every single year, and this is one that’s off to a great start.”

Like Calipari, Justus said the program’s focus is “on every individual” who plays for the Wildcats.

“It’s a process,” he said. “Each guy is on their own kind of path, and that never wavers when you’re in our shoes as an assistant coach. When you make a commitment to a kid and to a family that you’re going to work with them from the day that they’re here, both on the physical and mental, and sometimes with young kids the mental is more important than the physical. They need confidence, and you know, Cal has talked about that. Oftentimes you build your confidence by getting in the gym.”

During his tenure at Kentucky, Justus said he’s not been surprised by the way opposing teams play against the Wildcats, especially in the Southeastern Conference.

“The SEC is a tremendous conference with great coaches, great home courts, and it’s a big deal when Kentucky comes to town,” he said. “I think you see teams sometimes play uncharacteristic for how they have played in the past because they really want to beat Kentucky more than they want to play well individually.