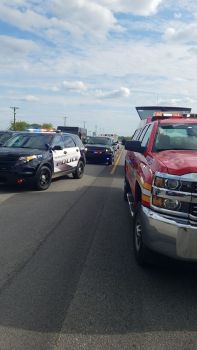 This was the scene on U.S. 27 Tuesday when the highway was closed for an accident that later claimed the lives of a Nicholasville couple.

A Jessamine County couple died of injuries from a motorcycle accident that occurred on Lexington Road (U.S. 27) at Industry Parkway about 5:30 Tuesday.

Both were pronounced dead a little more than half an hour later at the University of Kentucky’s Chandler Medical Center, according to the Fayette County Coroner’s Office.

The victims were Aaron Jamal Duke, 37, of Nicholasville, who was operating the motorcycle, and his girlfriend, Melissa Kathryn Scott, 34, of Jessamine County. The cause of death for both victims was described in the coroner’s report as multiple blunt force trauma.

Jessamine County 911 was notified at 5:26 p.m. of the collision involving the motorcycle and a pickup truck.

According to Sgt. Kevin Grimes of the Nicholasville Police Department, the driver of the truck, whose name he didn’t have with him when he spoke with the Journal, was traveling south on U.S. 27 and the couple were going north when the accident happened.

“He turned right in front of their path,” Grimes said.

The officer said the operator of the truck may not have seen the couple on the bike.

Neither the truck driver nor anyone else was injured in the crash.

Jessamine County Fire and EMS were both on the scene, and the injured were transported by ambulance to UK, where they were both pronounced dead soon after they arrived, between 6:13 and 6:18 p.m.

Grimes said U.S. 27 was closed until about 9:30 p.m. while the NPD did an accident scene investigation.

The deaths of Scott and Duke were two of three that happened in traffic accidents in Jessamine County within less than 24 hours.

On Wednesday around 12:25 p.m., a Boyle County woman, Gidget Whitehouse, 56, was killed in a single-car crash that occurred on Keene Road (Ky. 169) near The Paddock.