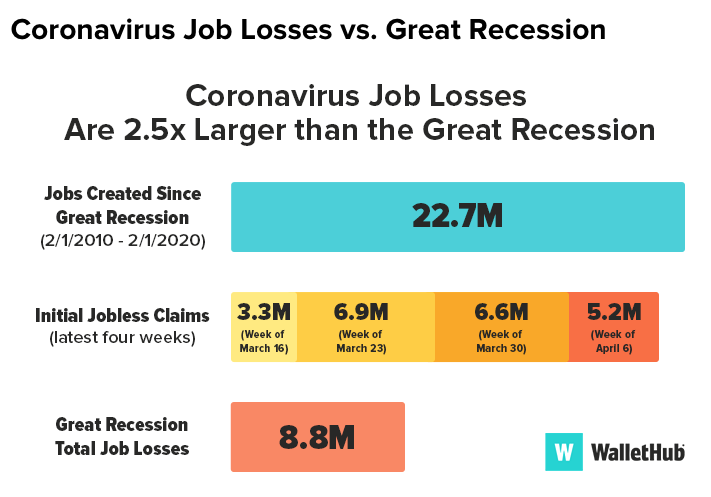 In response to the outbreak of the novel coronavirus (COVID-19), the U.S. economy has slowed to a crawl and many businesses have shut their doors because of government mandates to promote social distancing.

Those closures have resulted in layoffs and furloughs for millions of employees and left most small business owners scrambling to find ways to remain profitable during the shutdown.

Kentucky has the ninth biggest increase in unemployment because of the coronavirus, according to a new study from WalletHub.

WalletHub, an online personal finance company, used data from the U.S. Department of Labor for the study, which indicates 22 million Americans have found themselves temporarily or permanently without a job since the week of March 16.

“While Americans have started to receive their government stimulus checks, those who are jobless will likely still struggle,” the study states. “However, not all states have experienced the same levels of unemployment due to the pandemic.”

Kentucky ranks in the Top 10 states in unemployment as of last week. Colorado was most affected in regards to unemployment last week, while Connecticut was least affected.

The study indicates Kentucky has seen a 5,391.6 percent increase in unemployment claims during this time compared to last year’s unemployment rate.

Comparing January 2020, before the pandemic hit Kentucky, to April 2020, there has been a 2,146.97 percent increase in unemployment claims.

The study also compares job losses related to the coronavirus to the Great Recession, which ended around 2010, and in which there were approximately 8.8 million job losses.

“While there have been 22.7 million jobs created since the Great Recession, COVID-19 is unfortunately on track to wipe out all of the job gains by the end of this week, according to WalletHub projections,” said Jill Gonzalez, WalletHub analyst.

Kentucky is also one of the Top 5 states, along with South Dakota, Georgia, Colorado and Indiana, with increases in unemployment comparing April 2020 to April 2019.

According to an Associated Press story published Thursday, nearly 400,000 Kentuckians have filed for unemployment benefits in the last month, including 115,763 new claims last week.

“We are processing more claims than ever before and sending out more payments than ever before,” Gov. Andy Beshear said this week. “But I know that many of you out there still haven’t gotten the service that you need. That is our fault and we are working through it.”

Kentuckians seeking unemployment can find guidelines, information and more about how to register at kcc.ky.gov.