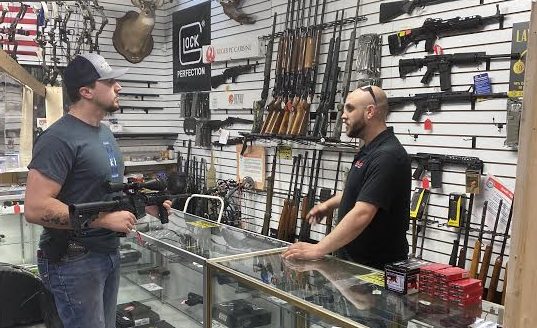 Justin Lowry, store manager for Sam’s Gold & Pawn, talks with customer Jake Adkins about a rifle he was looking at during a visit to the new-and-used gun shop Wednesday. (Photo submitted)

Toilet paper and hand sanitizer aren’t the only things people are hoarding because of the coronavirus threat.

Several kinds of guns and ammunition that were available in abundance last year are hard to find now.

Last month, the FBI conducted 3.7 million firearms background checks, the highest number ever, and more than 2 million guns were sold in March, about double the number sold in the same month last year. Kentucky was third in gun sales, behind Illinois and Texas.

Mashni said many of his distributors are sold out of some ammunition, and he has been informed it could be two to four months before some of it will be back in supply.

Mashni said he thinks gun sales have soared because of “the fear of the unknown.”

“People want to protect themselves. They don’t know what’s going to happen,” he said. “Better safe than sorry, I guess. That’s what everybody’s thinking now.”

Daniel Wier is the owner of Geek Armaments in Wilmore, a small personal business that doesn’t stock many guns but does transfers for online buyers. He said he’s gotten more calls for firearms than he has in years.

“I saw stock go from ‘I can get anything’ to ‘Everything is gone’ in about a week and a half,” he said. “By the time people knew they wanted it, they could no longer get it.”

He said 9 mm cartridges, which are used for many personal protection handguns, “have been sold out everywhere for a long time,” and ammunition such as .223, which is used for AR-15 rifles, has been missing for more than a month.

He said the Mossberg Shockwave, a legal, short shotgun with a pistol grip, which is popular for home protection, is sold out, and the company said it has no idea when it will have more available.

It isn’t only the threat of home invasion that is making people cautious, Wier said.

“I would say that it’s because of the concerns about restrictions on freedoms, which we haven’t seen yet, but which could come. And if it gets bad enough, there could be widespread violence,” he said. “Between those two things, I think that’s what’s got people concerned.”

Wier said, however, he was pleasantly surprised that in his home state of Illinois, gun shops were determined to be an essential business and can remain open during the coronavirus crisis.

That’s also true in Kentucky. Gov. Andy Beshear’s executive order last month restricting some businesses to reduce the spread of the deadly virus, declared some kinds of businesses such as groceries and fueling stations to be life-sustaining, essential businesses, and among them were gun dealers.