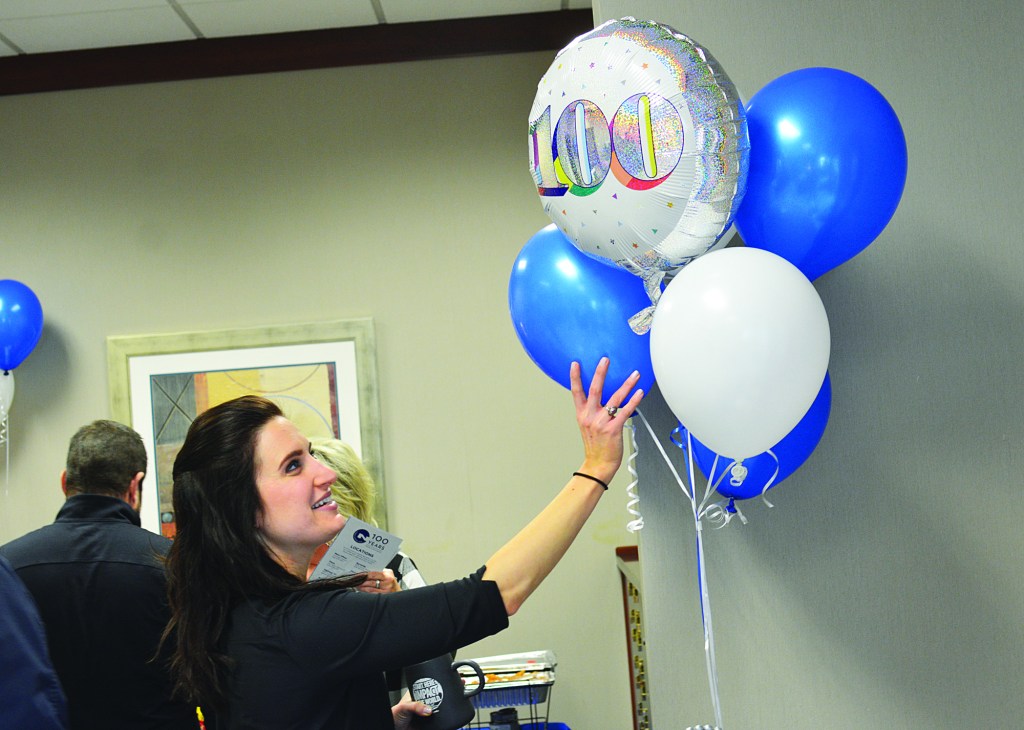 Abigail Stone, head teller and customer service representative for Citizens National Bank, turns some balloons so the 100 is facing guests as they come in the front door. The Nicholasville branch of the Somerset bank joined all its branches Friday in celebrating its 100th anniversary. (Photo by Randy Patrick)

They not only got to mingle with other customers and bank employees and enjoy some good food, but they also won money.

As part of its centenary celebration, Somerset bank’s branch in Nicholasville’s Keene Center was giving away $100 prizes every hour on the hour with a chance to enter a contest for the grand prize of $1,920.

Cara had learned about the party from head teller Abigail Stone the previous Friday and thought it sounded fun.

She also had been stressing over a couple of overdraft fees. But the $100 she and her family won covered that loss, she said.

The Nicholasville bank joined other branches of CNB throughout southeastern Kentucky Friday in marking its 100th anniversary between 11 a.m. and 2 p.m. while it also conducted business as usual.

“We’ve had a good turnout,” Stone said late Friday morning. “We didn’t really think we would have too many people before noon.”

But the lobby was full.

Many of the guests were customers of the bank.

“I like their dedication to serving the people,” Dan Shearer said after he and his wife Shirley had spent some time talking with Joe Wilder, the bank’s area president.

It’s a friendly competition, she said.

They know each other from serving together in the local Chamber of Commerce.