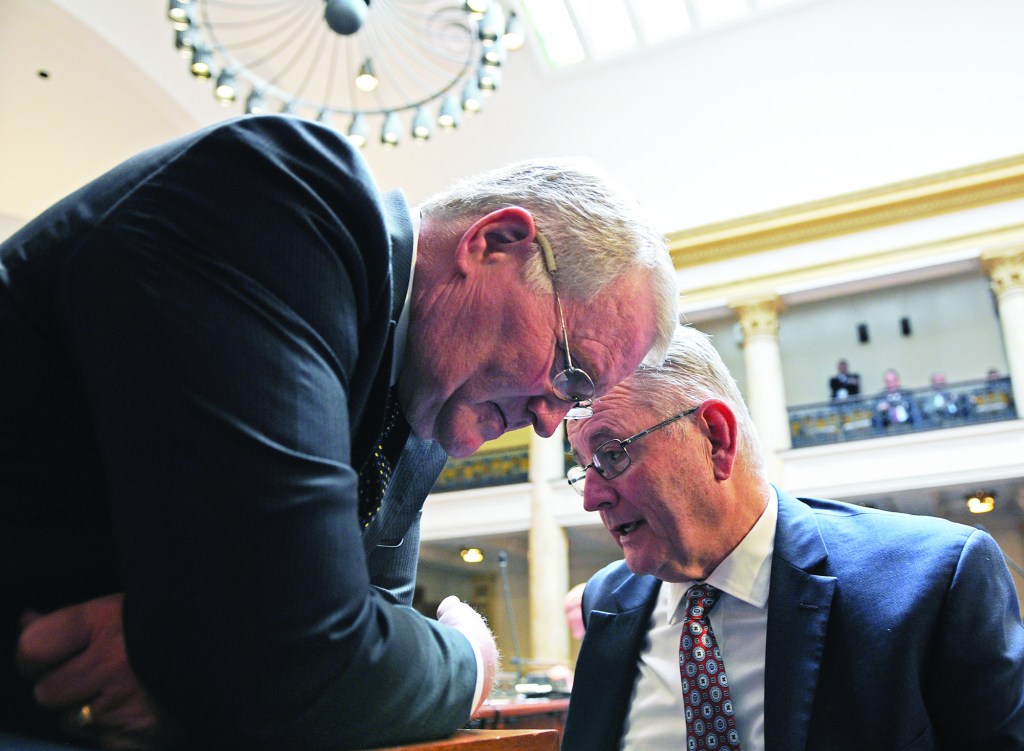 Sen. Tom Buford, R-Nicholasville (left), shown speaking with Sen. Jimmy Higdon, R-Lebanon, early in the session, was one of two Republicans who voted against his caucus's top priority, Senate Bill 1, to force local governments to cooperate with federal immigration authorities. The other GOP no vote was Sen. Alice Forgy Kerr of Lexington. (LRC photo)

When the Kentucky Senate passed legislation Feb. 4 to bar state and local governments from providing sanctuary for illegal immigrants, Sen. Tom Buford of Nicholasville was one of only two members of the Republican majority who voted against it.

The other was Sen. Alice Forgy Kerr of Lexington.

Senate Minority Caucus Chairman Johnny Ray Turner of Prestonsburg was the only Democrat who supported it in the 28-10 mostly party-line vote.

Senate Bill 1 is so designated because it is the majority’s first priority. It would bar cities, law enforcement agencies, public universities and other agencies from enacting or adopting policies to restrict cooperation with federal immigration enforcement authorities.

Although there are no cities in Kentucky that are formally “sanctuary cities,” proponents are concerned about policies in Louisville that they say limit how far police can go in cooperating with the federal Immigration and Customs Enforcement (ICE) in verifying immigration status. It would invalidate a Louisville ordinance that prohibits police from assisting ICE unless there is a court order, warrant or public health or safety concern.

Sen. Danny Carroll, R-Paducah, the bill’s sponsor, said last year it “would clarify that the local government has no ability to restrict that at all,” according to the Lexington Herald-Leader.

One of his motives, he has said, is to keep illegal immigrants from bringing illegal drugs into the country.

The bill is now in the House Judiciary Committee.

Buford told The Journal last week he voted against the sanctuary cities bill because the Fraternal Order of Police asked him to oppose it.

“Many lawyers feel it interferes with their current cases to help individuals in the system,” he said in a Facebook message.

He said it also “could add to confusion” in the schools and “result in the separation of children from their parents, and then we have kids in our schools without parents or homes.”

“I understand the need to find drug dealers, but I am not willing to sacrifice these kids and those that are trying to enter legally,” he said.

Before it passed the Senate, however, SB 1 had been changed to exempt school districts, domestic violence shelters, rape crisis centers, public defenders’ offices, health departments and some other agencies from being required to use their “best efforts, considering available resources” to support federal immigration law enforcement.