Rumor has it: EJHS production of ‘Rumors’ opens tonight, continues this weekend 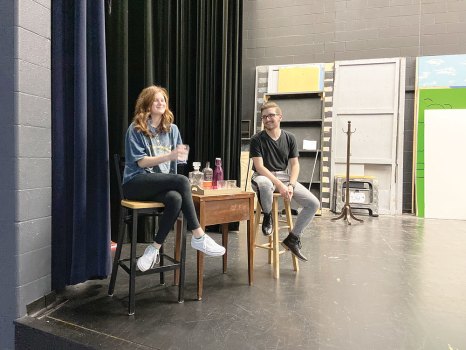 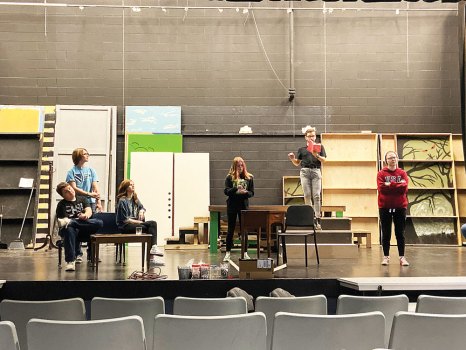 The cast of East Jessamine High School’s production of Neil Simon’s “Rumors” has been rehearsing since November. (Photo submitted)

A troupe of actors from East Jessamine High School will bring to life Neil Simon’s “Rumors” on stage this weekend.

Directed by EJHS drama teacher Lindsey Sovkoplas, the production opens tonight with a show at 7:30 p.m. at the EJHS auditorium. The show continues this weekend with showings at 7:30 p.m. Friday and at 2:30 and 7:30 p.m. Saturday.

Tickets are $8 for adults or $5 for students, and are available at the door by cash or check only.

Sovkoplas said there are a dozen EJHS students involved in the production of this classic comedic play set in New York City in the 1980s.

Work on the production began in November.

“Rumors” follows the story of Charley Brock, deputy mayor of New York City, and his wife, Myra, as they celebrate their 10th wedding anniversary with a fancy dinner party.

“They have invited some close friends to celebrate with them,” Sovkoplas said.

However, the couple find themselves in a “precarious situation,” she said, when Charley is found injured by a gunshot wound upstairs and Myra is nowhere to be found.

Those close friends attending the party navigate who to expose the situation to and who cannot be trusted.

“It’s a lot of he said, she said and misunderstandings as they try to get to the bottom of what’s going on,” Sovkoplas said. “Every once in a while a new guest walks into the party, and it starts all over. It’s a lot of mayhem, to put it nicely.”

Sovkoplas said she chose this play as a way to challenge her students.

And the students have risen to the challenge.

“I’ve seen a lot of growth with this cast,” she said. “We have quite a few actors who are younger and newer to the program. The cast has also had the chance to really explore these characters that are real. We’ve done production of ‘The Wizard of Oz’ and ‘The Addams Family.’ They are fantastic productions that have these real phenomenal characters, but they’re not necessarily real. With this production we’ve been able to have conversations about real characters that aren’t fantasy, giving them life with backstories and exploring relationships. We’ve done a lot of taking real characters, real stories and real people and putting it on stage.”

Sovkoplas said the production is full of laughs and the audience is bound to leave with grins on their faces.

“They can look forward to a very real experience,” she said. “And lots of laughs. I would say this is a good production for a more mature audience, maybe PG 13. It’s a lot of fun. It moves really quickly and you get to see some really relatable characters.”