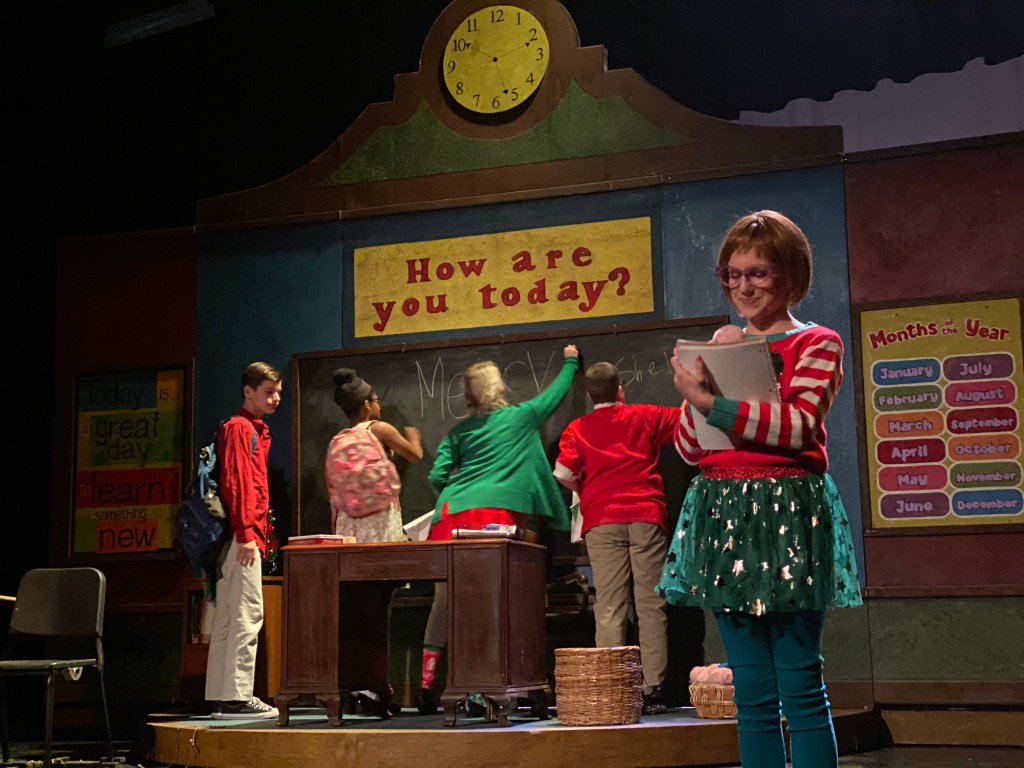 Rehearsing since October, Arts+ Community Theater will unveil its Christmas performance of “Junie B in Jingle Bells, Batman Smells” at West Jessamine High School this weekend.
Opening Dec. 20 at 7 p.m., showtimes also include Dec. 21 at 2:30 p.m. and 7 p.m. and Dec. 22 at 2:30 p.m. Tickets can be purchased in advance by emailing amy.harrod@jessamine.kyschools.us and can also be purchased at the door. Prices are $10 for adults and $7 for students. The performances will take place in the West Jessamine High School auditorium located at 2101 Wilmore Road, in Nicholasville.
“As the director, it was very important for me to make sure that since this show is double cast both casts were able to present the same production,” Austin Vahle said. “Part of that process was creating a cohesive cast and crew unit that were able to really lean on one another and offer support when needed.”
The show, he said, relies on the title character Junie B, played by Brooke Sturdevant and Elyse Adams. Vahle said it was important that the actors picked to play the part were able to work well together to carry the weight of the show with high-energy and enthusiasm.
Vahle said as a child, he would read the Junie B novels and said they taught him a lot about growing up, imagining, creating, and discovering the world through a different light.
“After choreographing ‘Annie’ this summer for Arts+ Community Theatre, he was asked about directing a winter show,” Amy Harrod with Arts+ Community Theatre said. “Immediately Vahle knew exactly the show that he would want to direct in the winter. That show was, “Junie B. in Jingle Bells, Batman Smells.” Throughout the pre-production, casting and rehearsal process, Vahle has thoroughly enjoyed recreating this childhood classic for newer generations to now enjoy.”
In contrast to other theater productions put on by Arts+, Harrod said this performance is led by a talented young group of teens and children.
“As a theatre teaching artist, I believe that it is vital to give students the opportunity to lead and perform in settings and worlds that may be different from that of their own,” Harrod said. “I am a strong believer in the fact that theatre will change and, quite honestly, save the world.”
Harrod said she believes Arts+ has not produced a show yet that has had such a young group of amazing leaders and performers.
Cooper Bartlett, who plays Herb, said growing up he read the book series and loved it. When he found out that Arts+ was producing “Junie B” as a Christmas performance, he was very interested in the part.
“I remember having our director for the show come to my elementary school when I went to Rosenwald Dunbar and help with our school musicals with Amy Harrod, my previous music teacher,” Bartlett said. “I particularly remember when he helped me during my role as Peter Pan. When I found out he was directing Junie B. I knew I must audition!”
Brooke Sturdevant, who plays the role of Junie B, said throughout her time with Arts+ she has enjoyed playing the crazy funny character and being on stage with her friends.
“It has been a lot of work, but it is a lot of fun to get to be on stage with my friends,” Sturdevant said. “This is my first play and I am loving it. Everyday there is something new added to the show that makes my character more exciting.”
For those coming to the show, Harrod said expect to walk away feeling joy, happiness, peace and goodwill during the holiday season.
“This show is a hilarious production full of smiles, laughs, and maybe even a few burps,” Harrod said. “We invite you to step into room one and experience the chaotic, yet beautiful, mess that is Junie B’s world!”