‘They were all honored to serve’ 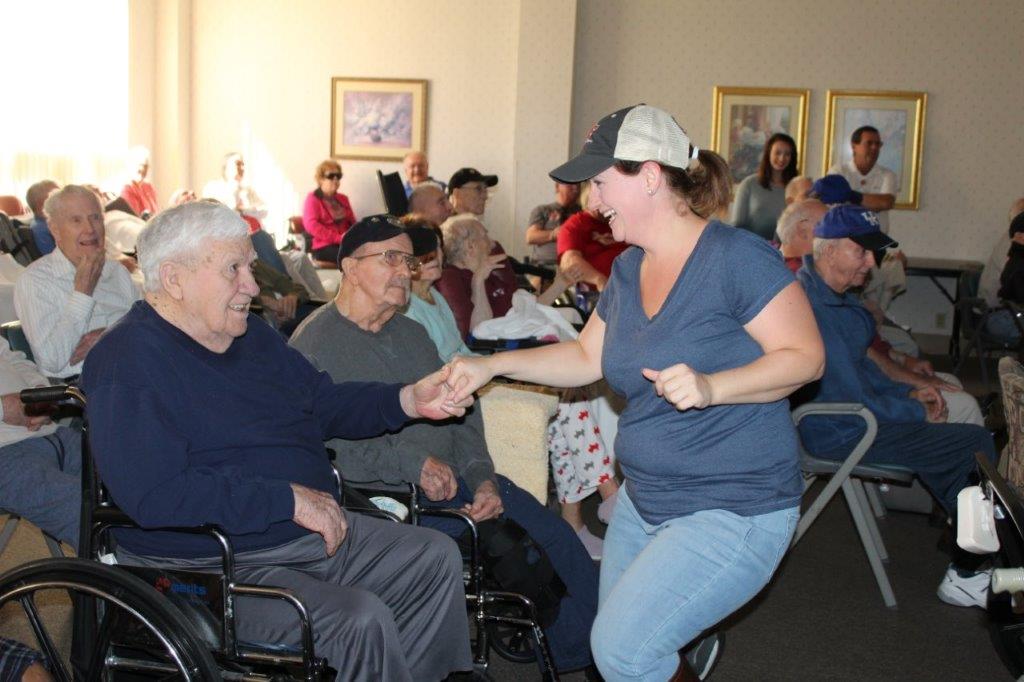 By Glenn McGlothlin
glenn.mcglothlin@gmail.com
Veteran’s Day is a day to remember and offer our thanks to those who have served our country in the military.
members of Thomson-Hood will ride in the Wilmore Veteran’s Day parade on Saturday, Nov. 9 at 10 a.m., after which the parade will conclude at Thomson-Hood with a ceremony that will be open to the public
John Fuqua, the assistant administrator at the Thomson-Hood Veterans Center in Wilmore, said one of the best ways people can show their appreciation to veterans is through conversation.
“Spending time with veterans is the best way to interact with them,” Fuqua said.
Administrator Joni Gosser from Thomson-Hood said the veterans look forward to Veteran’s Day.
“For a lot of them, it’s almost like they live it on a daily basis,” Gosser said. “It’s a very easy conversation to have when you’re new or wanting to know who they are. They are very eager to talk about those experiences.”
During the summer, Fuqua said the West Jessamine soccer team visited Thomson-Hood for a few days to spend time with the veterans.
“It’s awesome to see,” Fuqua said.
Gosser enjoys seeing young people come to the center. Around Christmas, Gosser said many groups schedule visits, but she wishes the visits were more frequent.
“We want to see that year-round,” Gosser said. “There’s a major correlation between elderly people and young children. They like each other, and they learn from each other. It’s really positive to see the way they interact.”
Fuqua said the public is always welcome to visit and build relationships.
“Anybody is allowed to come in,” Fuqua said. “You hear a lot of their stories from when they were in the military and how it changed their lives, all for the better. I’ve never heard anybody say that they regretted going into the military. They were all honored to serve our country.”
C.D. Moore, who lives at Thomson-Hood, served in the Navy for six years before joining the National Guard for almost 27 years. Moore first joined the forces in 1965, ten years into the Vietnam War.
“I taught diesel mechanics to the Vietnamese,” Moore said. “We would also take them out to teach them how to patrol the jungle. I don’t regret going over there. I volunteered for it, and I’d go again if I wasn’t so old.”
Moore, who has been at Thomson-Hood for just under three years, has been spending time in the workshop ever since he became a resident.
“They asked me if I would like to volunteer to keep the shop open,” Moore said. “I said ‘yes’ and now I keep it open seven days a week. I’m always in there. We make everything from birdhouses to outhouses.”
Moore said items made in the workshop are sold in the gift shop for the community to purchase.Thomson-Hood, which opened in 1991, is the first and largest veteran’s home in Kentucky, and Fuqua said it is also the largest nursing home in the state.
“We are licensed for 285,” Fuqua said.
According to Gosser, there are 157 people currently living at Thomson-Hood and the center is currently open to new residents.
“We are admitting people, but we don’t admit a large group at one time so the staff can get used to taking care of new veterans,” Gosser said. “It’s more of an opportunity for the staff to learn about the veterans.”
Fuqua said Thomson-Hood wants to provide the best care possible for its residents.
“We want to make sure that we don’t have more veterans than we can take care of from a staffing standpoint,” Fuqua said.
Cheryl Griffis has been working at Thomson-Hood for almost five years as a nurse assistant and now as a Kentucky medication aide. Griffis helps veterans with daily living and by making sure they receive their medications. Although Griffis doesn’t understand what it means to be a veteran, she has learned different ways the veterans show their appreciation.
“Each one has his or her own way of showing appreciation for the work we do with and for them,” Griffis said. “For some, it is through hugs or the desire to give, and for others, it is expressed through the quiet ability to trust and respond to you.”
Griffis said she has learned that caring for veterans is more than meeting their physical needs.
“There is a lot of intentional kindness that goes into taking care of people,” Griffis said.
Gosser is proud of the staff’s efforts in caring for the veterans.
“The way these employees care for these veterans is not seen anywhere else,” Gosser said. “It’s just so different and nice to work in a place where everything is positive and upbeat.”
Griffis, along with countless others, have helped Thomson-Hood achieve a five-star rating from the Centers for Medicare Services. Fuqua said around 20 percent of nursing homes are given that coveted ranking.
“It’s a good rating to have,” Fuqua said.