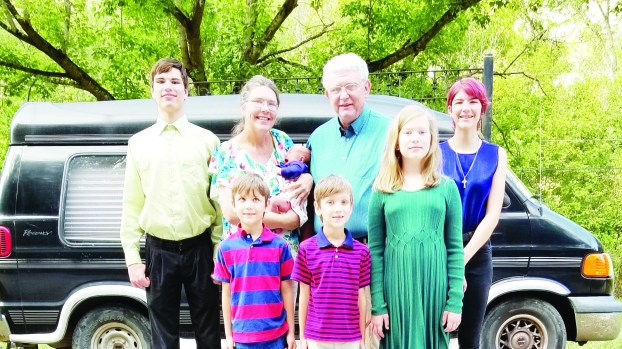 By Brittany Fuller
Brittany.fuller@jessaminejournal.com
Tara Hall is known by many in Jessamine County as the founder and director of the The Family Center in Wilmore, but what some may not know is earlier this month she gave birth to her daughter while enroute to the local hospital.
After a few times experiencing false labor, Tara went to Ft. Logan Hospital where she was discharged once again on Oct. 2 and told to continue laboring at home. A stop in Boyle County for groceries and a short drive home, Hall crawled into bed and slept until she woke up in active labor later that day. Grabbing her husband, John, they started on their way back to the hospital only to have Tara’s water break in front of their next door neighbor’s house.
“The next 10 minutes were the scariest of my life,” Tara recalled. “I kept trying to work through each contraction but the big bumps in our gravel road were so painful, I made my husband stop the van four times in less than a mile… I said to John, ‘we are having a baby now.’ He assumed I was just still shell shocked from the bumps in the road and the contractions, ‘No we aren’t. You’ll be fine now.’ (I said) ‘No! I’m having a baby now! Call 911!’”
Tara knew they would need medical assistance after the baby was born, especially since she had endured hemorrhaging with her second set of twins. Although, Tara said once she realized she was going to deliver the baby alone with her husband, all fear was gone.
“Praise God,” Tara said. “John stayed on the phone with 911 trying to describe where we were. I don’t know what the 911 lady was telling John, but I had birthed five babies and felt I knew what to do. ‘Put the phone down and get over here,’ (I told him). As soon as he parked John ran around to my side of the van grabbing the clean towel we had brought just in case.”
Tara said this delivery was by far her easiest. Through the delivery, she guided her husband and said she went from crowning to John catching in a matter of seconds.
Martha Hall was born at 2:18 p.m. weighing 8 lbs, 10 ounces – with an ambulance arriving on scene at 2:25 p.m.
“She was a very peaceful baby,” Tara said. “Bright eyed, looking around and ready to nurse. She only cried about three little times in her first six hours.”
The only snag so far in the process has been getting Kentucky to issue Martha a birth certificate, Tara said.
“She was born in Mercer County, and not at University of Kentucky, so UK would not issue it,” Tara said. “We went to the Mercer County Health Department, and they said because I was enroute when she was born the hospital was enroute to should issue it… Ft. Logan called Frankfort and they think UK should issue it.”
John said after driving around and making phone calls trying to hunt down a birth certificate, giving birth on the side of the road has been easier than the hassle which has come afterwards. “We hope to have this resolved soon,” John said.
For Tara, she said the Wilmore and Facebook community have been very supportive. They have given traditional gifts for the baby and covered dishes and helped during recovery and family adjustments.
“Some folks are in shock that we delivered Martha ourselves, but I always reply, ‘I’d had five babies, my body and I knew what to do,” Tara said. “John just had to catch and not drop her. We both did our parts… It was both an easy and a terribly hard thing all at the same time and I’m sure I’ll have mixed emotions for a while. I take comfort in knowing support of our community will continue.”
Tara said her only regret is that she did not have her other children present for the incredible experience birthing Martha on her own was.
“I’m not sure John and I could have focused as well with them as distractions,” Tara said. “Although we would have had more pictures and maybe a video if they had been there.”
Regardless, Tara said all of their children have all embraced their new sister and are thrilled to have her.
“Isaiah, our youngest said, ‘At first, I didn’t want a little sister,’” Tara recalled. “’And now?’ John asked him. His face lit up and he beamed, ‘She’s the best thing ever.’”