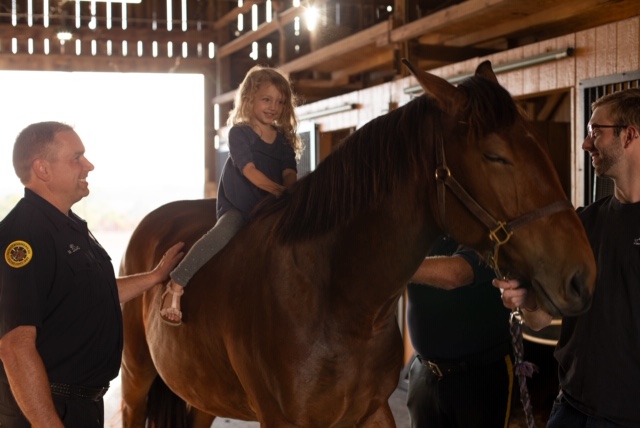 Advocates of mounted policing have said horses function as community ambassadors, and Asbury University strives to deliver just that through its Service Mount Program.
Individuals who might otherwise be hesitant to approach the police will walk right up to a horse, some officers have said. Consequently, Asbury’s rigorously trained mounts are in high demand — so much so that several departments visited Asbury the week before the recent national colloquium held in Lexington to make sure they could have the first pick of horses.
“It’s the students’ passion that makes the difference,” said Wilmore Mayor Harold Rainwater, director of Asbury’s Equine Program. “They know what departments are looking for, and they are so skilled that some of them will wind up becoming trainers in these departments after they graduate.”
Asbury’s Service Mounts Training Program is set apart by excellent leadership — including internationally-known trainer Jesse Westfall, Rainwater and farm manager David McIlrath.
Matt Sagan, an Equine Center graduate, recently attended an open house where he said goodbye to Jackson, the horse he trained throughout his time at Asbury.
“It helped having Jesse Westfall as a training instructor and to have police units coming in and looking at horses ,” Sagan said. “Training was very eye-opening. I realized I could make a career out of this.”
Sgt. Doug Muston of the Detroit Mounted Police says Jackson will play a key part in his department’s efforts to build positive relationships with the community.
“There is no doubt in my mind that Jackson is going to be great — I like to think he’s going to be one of our best horses, if not the very best, for years to come,” Muston said.