‘More than just a paint job’ 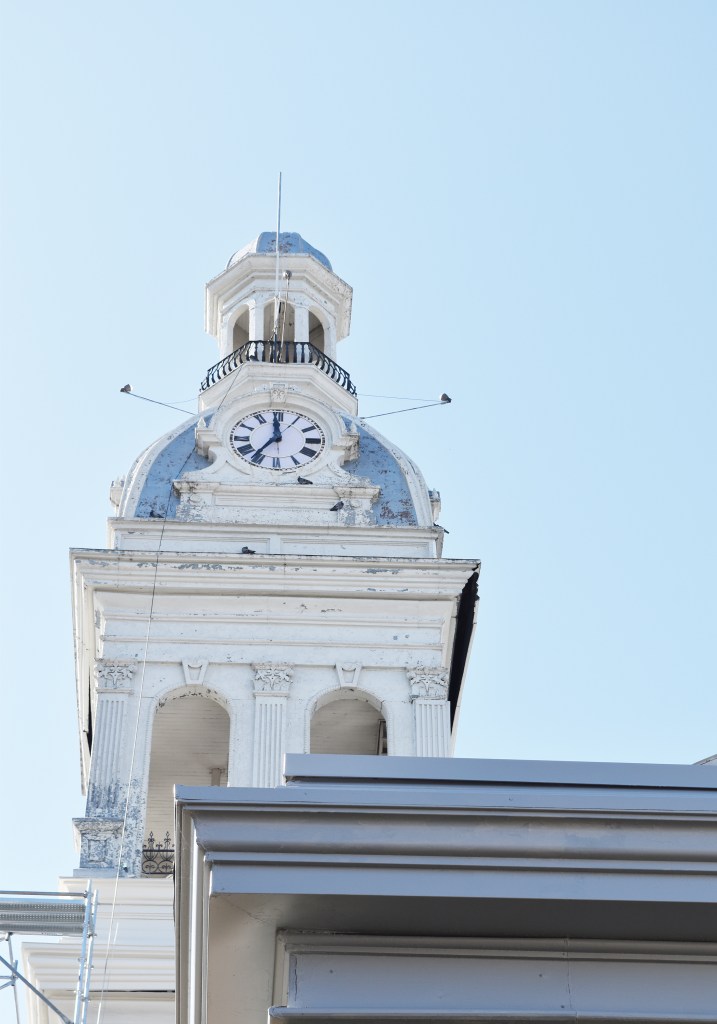 To those passing by, the renovations taking place at the Jessamine County courthouse may seem solely aesthetically pleasing – but a whole lot more work is taking place than just “meets the eye.”
“They’ve done renovations, they’ve done projects, but not to this scale,” Jessamine County Judge-Executive David West said.
The last renovation the Jessamine County courthouse saw was in 1964 when two wings were added. The current project started in mid-September and is expected to take 180 working days, although West said they are hoping to get done much sooner but it all depends on the weather.
“We constantly have to make improvements and preventative maintenance to these facilities,” West said. “When I got into office I asked Judge Cassidy if there had ever been a structural survey by an engineer of the facility.”
West said Cassidy was not aware of a survey ever being completed. Being that Cassidy was the judge for 24 years, and assure there had not been any work of this magnitude completed in the last 30 years, West commissioned a study in January of 2017 when engineers took several months to thoroughly go through every part of the courthouse and let the current fiscal court know exactly what needed to be fixed.
“From the top of the courthouse to the bottom they identified some issues that we need to take care of,” West said. “It showed that we had a good building but there were some details that needed tending to now or they would get worse.”
West said the courthouse had leaks due to the original portion of the courthouse, build in 1873, and the two wings that were attached in 1964 butting up to one another along their perimeter where walls joined together.
“From the outside it is going to look like a glorified paint job, but there are things such as tuck pointing, repairing the mortar, pressure washing and sealing the brick with breathable sealer,” West said. “Before you start working on the inside, you have to fix the outside.”
Tuck pointing, masonry rework, sealing, replacing any old wood, repairing structures and arches, attempting to repair statues on each end of the building, gutter repairs and much more are currently on the list of items to be renovated, or repaired.
“Once we decided to do the project we advertised for bids and got three good bidders who do historical projects,” West said. “Midwest Maintenance, Inc. was chosen.”
The fiscal court accepted a bid for $999,000, West said and the funds will come out of court facility fees and will not come out of the general fund.
Two structures will also be built on top of the flat roofs pertaining to the two wings that were added in 1964 to advert water to drains so there is no standing water on the roof on either side of the courthouse.
“Right now, the water builds up over the entire area of the roof,” said Gary Goldey, maintenance and property manager for the Jessamine County courthouse. “This new section is going to have a section in the middle where it will drain away from the exterior walls and keep the water from ponding in those areas.”
West said the engineers went through each part of the courthouse and showed the fiscal court their deficiencies such as rusting areas on the roof, places and causes for concern for the leaks, some of the drains which had been covered, gutters, holes in metal, painting and masonry that needed to be taken care of.
“These areas need to be tended to or they are going to get worse,” West said.
For instance, the roof to the original building was never attached and is currently sitting on top of the brick of the 1873 structure, Goldey said. Now, with this renovation, the roof will properly be attached. Additional bracing, threads and rods will be run through any areas which need to be fixed structurally as well.
As of right now, the front entrance of the courthouse is not accessible. Those who need to visit the courthouse will need to enter through each side entrance or the back of the courthouse.
In fact, during a pre-construction meeting Goldey said he noticed that the weather vane was damaged, and the interior section of the weather vane had dislodged and fallen through the hatch and was resting on a step.
“I knew whatever was up there did not have any support and was just up there swaying,” Goldey said. “So, we roped off that and the very next morning it fell off.”
Another area that will get special treatment is the bell tower that fascinates a lot of people when they find out it is actually made out of wood wrapped in metal, Goldey said.
“They are going to take all of that off to clean and visibly inspect the wood behind it and make sure everything is good,” Goldey said.
West said, “This certainly takes care of every major issue. Painting the brick, the mortar, the exterior metal, the roof the drainage – this will set the courthouse good for (years to come).
“We had two years of court facility fees that we hadn’t used for any major project which can only be used for the courthouse and has to be used for maintenance and upkeep of the courthouse.”
Through it all, West and his staff say they are appreciative of everyone’s patience and understanding while the courthouse receives a much-needed renovation.
“This is a major project that should set the county in good standing with the building, the structure and the outside for many decades to come,” West said.