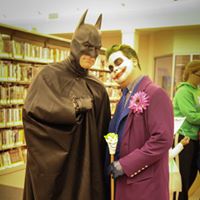 This Saturday, superheroes will descend on the Jessamine County Public Library with the annual Comic Surge event.
Located at 600 S. Main St. in Nicholasville, the event will be open to the public from 10 a.m to 4:30 p.m. JCPL invites the community to put on their favorite superhero costumes and compete for best costume prizes. There are no registration or admission fees for this event.
“The event will take place in various locations throughout the library, with activities such as a video game truck and a library-wide scavenger hunt for all the amateur sleuths,” Marketing and Public Relations Coordinator for JCPL, Grant Laufenburger said. “We’ll have several ‘make and take’ craft projects, always a hit with the kids, The Duck Hunt Blasting Gallery is based on the 1984 Duck Hunt video game. The gallery is a fun inflatable game. Fans of the Marvel movie, ‘Black Panther,’ will see the Shuri character offering guests an opportunity to try one of the library’s Zspace computers. These computers are a mix of virtual and augmented reality in which you will interact with objects being projected.”
Props, replica superhero vehicles, and appearances by popular characters will provide photo opportunities throughout the day, Laufenburger said.
Live music and dancing will also take place with line dancing with the characters from 11 a.m. to noon.
“From Noon to 1 p.m. Death Mountain Band from Lexington will perform a selection of video game-based music with soundtracks and theme songs from your favorite games,” Laufenburger said.
Mindy’s Jessamine School of Classical Dance will perform from 1:30 to 2 p.m., followed by the Parade of Characters. Judges will be taking notes for the Best Costume Contest throughout the day, and at 2:30 p.m. contestants will be brought up onto the stage for the public to judge. Awards will be given at 3 p.m.
Vendors will also be set-up throughout the event.
“Comic Surge is one of our most popular events at the library. I’m excited to see everyone and all the costumes they’ll be wearing,” Laufenburger said.