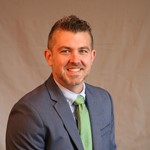 Payne will take over after former principal Beth Carpenter was named as Director of Student Services and joined Central Office in August of this year.  Payne is only the third principal to lead RDES since the school opened in 1992. Payne is expected to assume his duties at RDES on Oct. 14.

“Joe is a terrific fit for Rosenwald-Dunbar,” Supt. Matt Moore said. “He believes that all students can learn at high levels and that relationships are vital to ensuring student growth and success. As the WJMS CRA, he formed connections with RDES staff and families and I have no doubt that he will hit the ground running.  He is dedicated to doing what’s best for students and meeting their individual needs, both personally and academically.”

Payne has spent the last three years supporting students and staff as the Curriculum Resource Administrator at West Jessamine Middle School.  Prior to that time, he spent eight years in the Fayette County School District, first as a special education teacher at Beaumont Middle School and then as a behavior coach at James Lane Allen Elementary.  Payne was also named a Hope Street Group Kentucky Teaching Fellow in 2015, assisted with decisions around critical education policies in the state and also served as an Asbury Teacher Fellow.  Payne earned bachelor’s and master’s degrees from the University of Kentucky. Jessamine County is home to Payne and his wife, Morgan, and their six- year- old daughter, Shelby.

Moore expressed his appreciation to the members of the Rosenwald- Dunbar Elementary SBDM council for their commitment and hard work during the principal selection process.  Moore said, “The council utilized feedback about the characteristics that students, staff, and families wanted to see in their next principal to select the ideal candidate to lead RDES.  It was clear during the interview process that Mr. Payne’s beliefs, skills, and goals matched up perfectly with what the school community was seeking.”

Payne said that the RDES principal position is the only opportunity that could have tempted him to leave WJMS and that he is excited to get started at RDES.

“Rosenwald-Dunbar Elementary School is a uniquely special place with a high-quality staff, students who are eager to learn, and a beautifully diverse community, willing to partner together for the success of all students,” Payne said. “I am committed to building on the rich tradition at RDES to create a positive learning environment with empowered students, staff, families and community members.”