Colts’ size too much to Jags to overcome 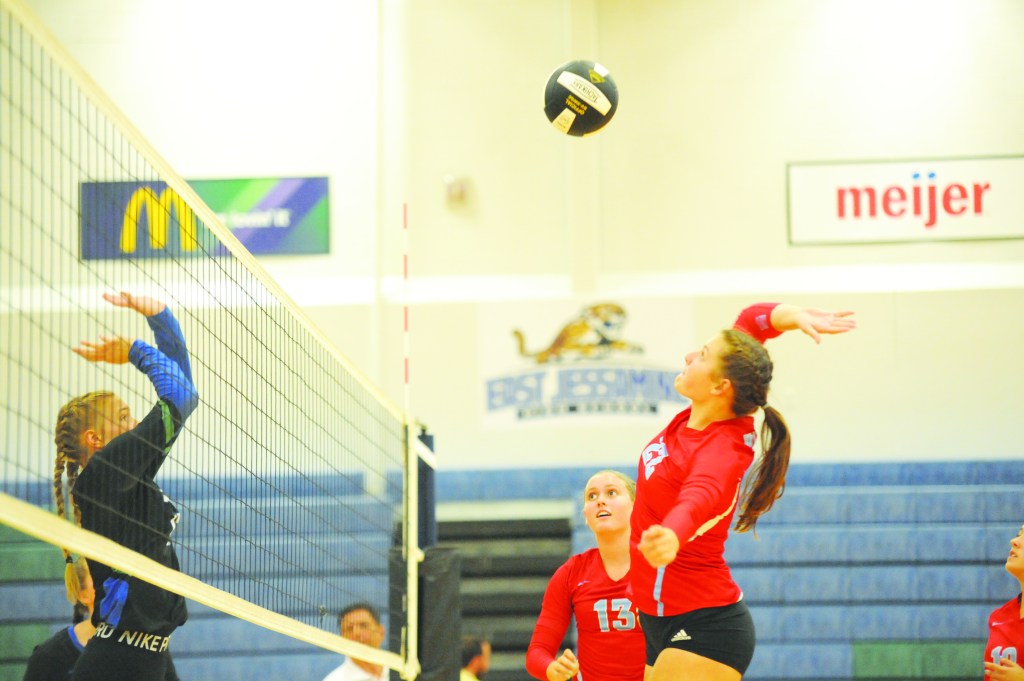 By DEREK BRIGHTWELL
derek.brightwell@centralkynews.com
Tuesday night’s showdown between rivals West and East Jessamine was a game of runs. It just happened to be that all of the runs were for the Colts. Over the span of all three sets the Jaguars could never sustain a serving rally. The Colts got on several roles and took all three sets (25-13, 25-9, 25-7). The win is the sixth for West Jessamine.
“This is one of their better nights. They just stayed focused the whole night. They came out and got two on them — the first two games — and they just didn’t let up,” West Jessamine coach Bill Bird said. “We’re so young and what we’ve been dealing with is that they’ll get those first two wins and they’ll just let up. But we kept the pedal to the metal tonight. I’m proud of them.”
One of the biggest keys for the Colts was incredible size at the net. Led by senior Josie Disponette, West Jess controlled the net by challenging the Jaguars’ every shot and landing devastating spikes.
“We’re big and young all the way around,” Bird said. “Josie — she had a great game. She was just putting the ball back down at will. She’s — her and Vic(toria Kusche) both are our only seniors and they’ve really stepped it up. Really leading the team. Josie really put it up.”
“We do have a couple of taller girls and usually they’re on point and block a lot better than that,” new East Jess coach Rachael Hager said about her team. “The main thing is we need to coach blocking and getting up there to cover those hits and cover those ridiculous spikes.”
Tuesday night was Hager’s first game on the sideline for the varsity team, and believes that the coaching change has affected her team. After winning four matches in a row, the Jags have lost the last two.
“The girls have been through a lot in the last week with everything that had happened,” she said. I could tell they were frazzled. They went out and did what they could. I’m proud of them no matter what.”
West Jessamine (9-5) will take part in the Taylor County Throw-Down over the weekend. East Jessamine (5-5) will compete in the Anderson County Smash Tournament over the weekend.