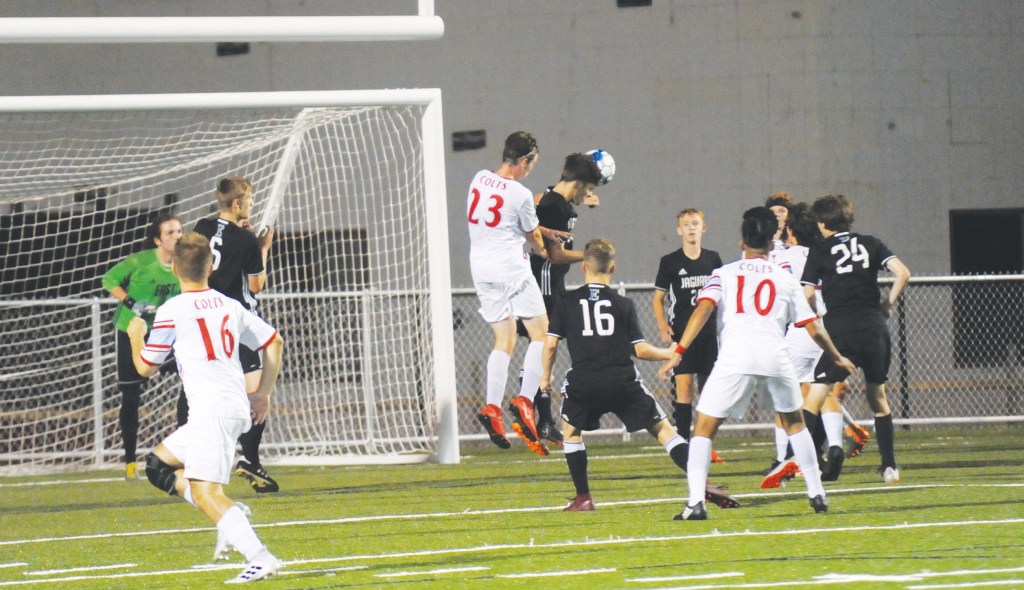 Colts pull away late for win over Jags

For the first 58 minutes, it seemed like nobody could score in the match between East and West Jessamine boys soccer clubs. Not from lack of trying, but both teams were so active on the defensive half that offense was stifled.
“I think that we’ve been playing really well and are able to keep the ball but we lacked that killer instinct to be able to put the ball away,” West Jessamine coach Brock Sutherland said about the first half. “We had a couple of chances in the first half and we didn’t even get shots off.”
That changed when Sam Snow took a touch pass from A.J. Kinnell to put the Colts on the board with 27:51 remaining in the game.
“It was a great through ball by A.J. and Sam did what he does,” Sutherland said about the play. “He just held off the defender and it was a great finish.”
In the first half, however, defense was the name of the game. An incredibly exciting scoreless first half saw both teams with great scoring opportunities both fantastic plays by both keepers — Collin McKibben for West and Isaac Rocco for East — or by the backlines preserved mutual shutouts.
“They tried but we were still able to stop them. They had some great looks but we had miraculous saves,” East coach Louis Jones said. “Goalkeeper Isaac Rocco is strong. He’s a junior — a great leader for us.”
“Collin is — oh man he’s just so solid. It seems like he gets better and better every game,” Sutherland said.
Once Snow put one in, however, an avalanche came for the Colts. Sutherland’s team became more aggressive on the offensive end — something he attributes to being more relaxed after the goal.
“I think that energized us for the last 20 minutes, and I think in the last 20 minutes we were the better team,” the West coach said. “That’s what we’re trying to do for the whole game.”
East’s defense was still stellar, highlighted by a play when Rocco was pulled away from the net and the ball came free in a crowd of Colts. As the shot went toward the goal, Nathaniel Lilly jumped to kick it away for a save.
“The back line is young. I’ve got three sophomores across the backline.
We lost eight kids year, and almost our entire back line,” Jones said of his defense’s performance. “We’ve got one senior and three sophomores but they’re working hard. They’re growing and learning each other.”
But as the clock ticked down, a Kevin Ralston goal off another Kinnell assist made it 2-0 with 5:46 remaining and Briyan Cortez put the final nail in less than two minutes later.
“It’s just a huge rivalry. We always know that East is going to give us everything. That’s what you want out of your crosstown rival. You want to have a battle,” Sutherland said. “
Both coaches came away proud of their teams’ effort. East coach Louis Jones said that they’d be in good shape if he sees that from his kids every night.
“It was tough. The boys played hard. That’s all we can ask of them is that they give their best and that they compete,” he said. “We want them to know that we can be competitive with anyone we face… I feel like the score wasn’t relative to how we played.”
The Jaguars travel to George Rogers Clark on Sept 3 while West will make up the rescheduled match at home against Tates Creek on Aug 31.