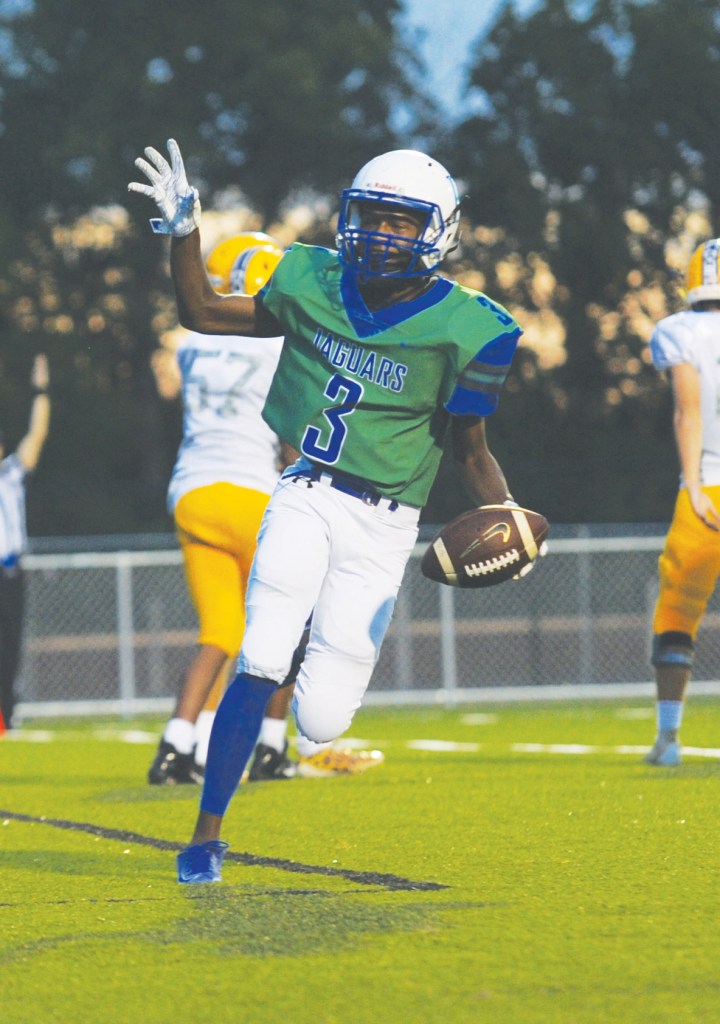 Jaylen Taylor had recovered a fumble for a TD in Friday's win over Lincoln County. (Photo Derek Brightwell)

By NANCY LEEDY
nancy@theinteriorjournal.com
STANFORD — Turner McHolan’s 1-yard touchdown run in overtime proved to be the difference for East Jessamine Friday night as the Jaguars pulled off a thrilling 42-35 win at Lincoln County’s Death Valley Stadium.
Lincoln (1-1) scored the first touchdown of the night just three minutes into the game and the scoring battle was on. The game was tied 14-14 after the first quarter, 21-21 at the half, 28-28 after the third and 35-35 at the end of regulation. However, after a night of trading scores, Lincoln couldn’t answer at the end with East the only team getting in the end zone in the overtime period.
McHolan scored four rushing touchdowns to help lead the Jaguars to the win, tallying each score on a short run. McHolan who had 34 yards rushing on 11 carries, scored on runs of 5, 9, 1 and 1 yards. He went 5-for-10 passing for 80 yards.
East (1-1) amassed 355 rushing yards, led by Valdon Miles with 152 yards on 17 carries. Dylan Moore finished with 139 yards and a touchdown on 28 carries. Moore also had 25 receiving yards on two catches. Jaylen Taylor had one catch for 25 yards.
East got the ball first in overtime and Lincoln was unable to answer on its OT drive, with a 4th-and-goal pass intended for Clayton Davis broken up in the end zone.
Lincoln posted the first lead of the game, with Dylan Burchfield capping off a six-play, 51-yard drive with a 6-yard run with 9:19 still to play in the first quarter. Loren Melton booted the first of his five point after kicks to make it 7-0.
The Patriot lead lasted just short of five minutes, with McHolan answering with his first TD, a 5-yard score, with 4:20 showing. Jon Alverson, who made six point after kicks, put through his first for a 7-7 tie.
East was back in the end zone just 19 seconds later, as Taylor returned a Lincoln fumble off the ensuing kickoff to the goal line on a 28-yard scoop and score to make it 14-7.
Less than three minutes later the game was tied again. Rodney Alcorn, who led the Lincoln rush with 47 yards on 13 carries, took the ball in from 2 yards out for a 14-14 score.
Harris, who went 12-for-17 through the air for 203 yards, completed first-down passes of 23 yards to both Davis and Levi Daugherty on the drive.
Davis, who was Harris’ leading receiver with five catches for 127 yards, gave the edge back to Lincoln, 21-14, midway through the second quarter. Lincoln took over on downs at its own 16 and the drive culminated in a 27-yard pass from Harris to Davis. Harris also threw first-down passes of 10, 24 and 21 yards to Troy Gowins, Davis and Zack Hazlett on the drive.
East stuck to the ground game on its next scoring driving – nine plays, 80 yards. Moore scored on a 24-yard run with 1:43 left in the first half to tie the game at 21-all.
The two longest-sustained leads in the game were held by Lincoln in the second half.
For the second straight week, Levi Daugherty scored on a strip-and-score. Fifty-nine seconds into the third quarter, Daugherty stripped the ball away and ran 55 yards to the goal line to put the Pats up 28-21. It took East until just 47.8 seconds remained in the period to answer. McHolan scored the game-tying TD with a 9-yard run.
Harris ran in a 3-yard touchdown with 10:54 to play in the fourth quarter to put the Patriots back up 35-28 and the team held the lead until just 1:12 remained on the clock. McHolan tied the game back up to force overtime on a 1-yard score.
Lincoln had 298 offensive yards, including 95 on the ground. Burchfield rushed for 40 yards on seven carries.