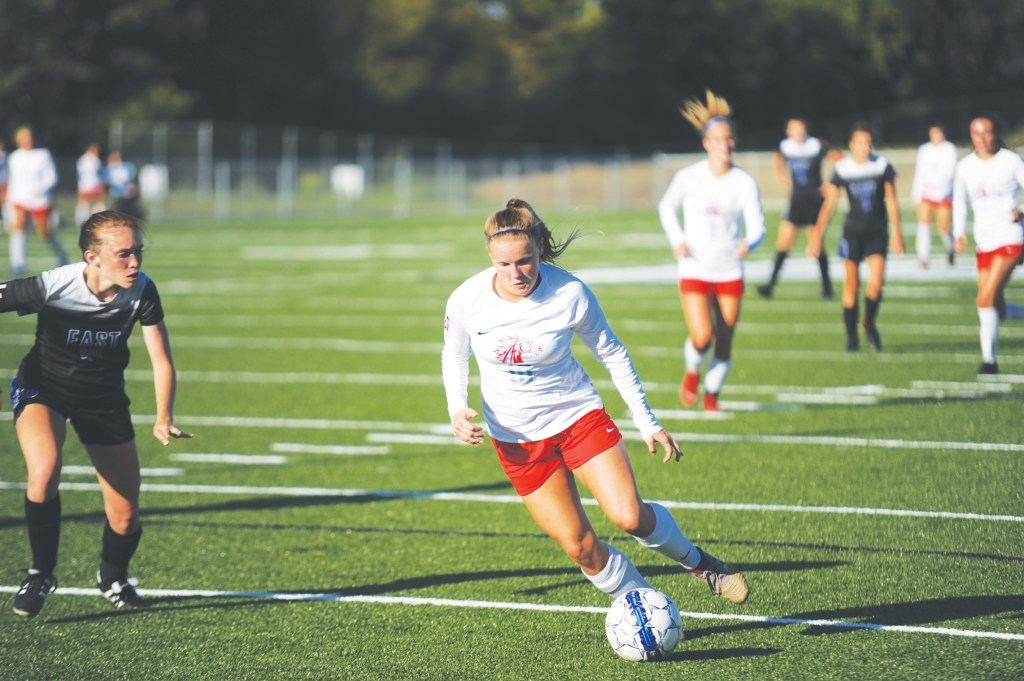 By DEREK BRIGHTWELL
derek.brightwell@centralkynews.com
On Wednesday night’s cross-town rivalry girls soccer match between the Colts and the Jags, it was all West Jessamine as they prevailed 6-0.
West senior Mackenzie Tucker had a hat trick with two goals coming in the first half and the third coming with 14 minutes remaining in the game. Turner also had an assist for a total of seven points on the match.
“When you can draw people like that, it’s going to take some attention and free other people up,” West Jessamine coach Kevin Wright said of the senior. “Our passing game — we’re so solid.”
Junior Reese Bolton added a goal in the first half via a corner kick that sneaked its way in the farside of the net. Seniors Audrey Henry and Alyiah Collins also added goals in the second to put the game out of reach.
“Our senior class, what they’ve done with two state titles and a Final Four last year,” Wright said. “A lot of experience. When you just play good team ball — move the ball — we like to attack as a unit and defend as a unit.”
The Colts defense was smothering, not allowing the Jaguars to get a shot on goal until late in the second half.
This was the first match back at full strength for Wright’s squad as the Colts had run a split squad to play in two tournaments over the weekend playing three games in two days in Gatlinburg and hosting two games in the VisitJessamine.com Soccerama.
Wright said it’s always good to get a win over the rival Jaguars, but credited coach Devon Burnside’s team for how hard they played. That effort was an improvement over what Burnside had seen over the weekend and she said she was incredibly proud of her team.
“I told them that, obviously, I didn’t like the score. But I liked the effort and the hard work and they didn’t give up,” Burnside said. “Which, going back to what I told you a couple of weeks ago, I’m training them to be mentally tough for everything. They showed that tonight.
“I hugged them all after the game and told them that I loved them. I just picked them up because they needed a good pick-me-up,” she added. “East/West is always an emotional game, it doesn’t matter what sport. I’m pretty content with it. Obviously I don’t like losing, but I’m pretty happy right now.”
Burnside also said she was encouraged by the play of specific members of her team and the effort they showed, even as the game got out of hand.
“Katie Turner — my senior captain — she showed out. She came to play. She’s crying after the game because obviously it’s emotional. She saved us for the most part. MVP right there,” Burnside said. “Her, senior Hadley (Turner). She showed out. I’ve never seen her play that hard in my life. Marrisa (Perez) showed out, Ashlyn (McHolan), Victoria (Linnik) — they’re all standouts because they worked their butts off. They wanted it. They take this stuff seriously.”
West Jessamine will be at home on Sept 4 to square off against George Rogers Clark while East will be at home on the third to take on Southwestern.